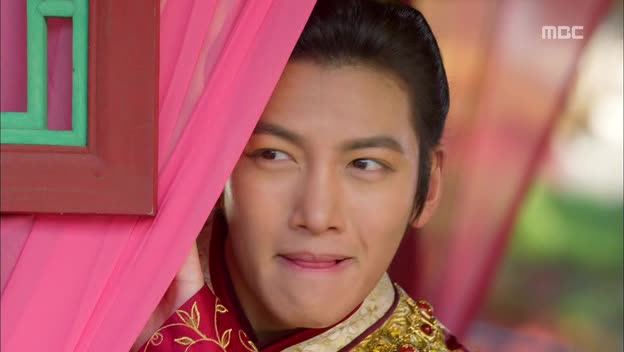 The battles inside and outside of Ta-hwan's palace rage on and both come to a head. This means "Empress ki" is on the brink of another plot shift that will show us what these characters are made of and send them along the next stage of their fifty episode journey.

Inside the palace, dealings are foul between Empress Tanisiri, the empress dowager and the poor concubine who had the misfortune of getting pregnant. Seung-nyang is at the center of Tanisiri's plans and struggles to stop them without losing her life or losing Tanisiri's trust. I find that Seung-nyang's character is the weakest of the three main characters. She is the most difficult to read and her reactions to Ta-hwan's love, adoration, struggling and pain are confusing. She seems bothered by his unhappiness, but they her voiceovers focus mostly on Wang Yoo. After she decided not to kill Ta-hwan, her character has been strangely stagnant despite all of the plot twists. I am as unsure of how she's feeling as Ta-hwan is.

Ta-hwan, on the other hand, has been pushed to the max and it's very obvious how he is feeling: betrayed, guilty and trapped in a corner by palace politics. It is only a matter of time before he is forced to recon with his cowardice and complacency. He has to decide who to side with, the dowager empress or El Temur. The writer has done a good job of keeping Ta-hwan in his mental bubble of inaction and is now quite cleverly forcing the new emperor to take a stand. Part of the brilliance of this character is owed to Ji Chang-wook and his amazing ability to manage multitudes of facial expressions.

If Ta-hwan would be compared to Wang Yoo, he would be found lacking. Wang Yoo was in a similar position as Ta-hwan. He was in line for the throne, but faced numerous obstacles to get there. the difference between the two is that Wang Yoo fought and plotted while Ta-hwan did nothing but revel in his life style and fear the future. Wang Yoo is strong, which is why I was disappointed by his cliffhanger this episode. It was very anticlimactic whereas Ta-hwan's confession was heartfelt and difficult for him. It was the next step for him to become a good ruler and to become a man who takes charge of his own destiny.

In terms of the more minor characters, "Empress ki" paces their appearances well. One example is the powerful El Temur who doesn't appear often in episodes of late, but he has a large impact when he does. This is a skill that will prove handy as this fifty-episode drama progresses.