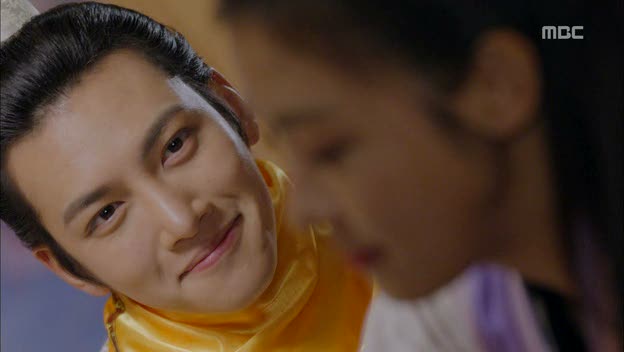 My wishes were fulfilled in this episode. The love entanglements are further knotted, Ta-hwan grows up a scoach, and the political game now hinges on a very delicate balance of power.

Seventeen episodes in, Ta-hwan has finally decided to step up to the plate. He may be inexperienced and weak, but he has the motivation and wherewithal to fiercely battle El Temur for power. It took a lot of hardship and suffering to break through his insecurity, but Ta-hwan has decided to be no one's pawn; not El Temur's; not the dowager empress'. His past weakness serves as his shield against suspicion unless his enemies suss out that Ta-hwan has wisened up. That same weakness could still unravel him: he searches for approval in Seung-nyang where he should search for it within himself. But that's what makes Ta-hwan's character so great. He is weak and not fit for his position, as many rulers in time have been.

At the same time Ta-hwan finds inner strength, Wang Yoo continues to use public sentiment and fear of superstition to his advantage in order to back El Temur into a corner. It works well, but the beauty of El Temur as a villain is that he is not easily shaken. There is a lot of bloodshed and torture and death, very realistic happenings for this time period. This is what "Empress Qi" does well, mixing different political intentions, players and situations to weave a very complicated, intriguing story.

I haven't mentioned Seung-nyang in a while because her character stagnated a bit. But now she has Wang Yoo near her, she's constantly on edge and using her intelligence to help him, even within the strict confines of her position as a palace maid. The pain she suffers when he shoves her away unintentionally brings her closer to Ta-hwan who she doesn't care for. However, she does empathize with him, which will be the key to their final political union.

Proximity to Seung-nyang has done Wang Yoo's character some good as well. He finally has something that makes him less-than-perfect: love. It makes him weak and irrational, something that is needed for his character to err, learn and grow. Even under the pressure of battle Wang Yoo remained steadfast. It is love that truly challenges his strength of will. It is also love that I've been waiting to see more fully developed.

Although I dearly love "Empress Qi", there were a few glaring weaknesses. First was the introduction of Lady Noh, the favored concubine of Ta-hwan's father. She was very obviously brought in to further the blood vow blood line and she should've been mentioned much earlier to make the sudden introduction less awkward. There was plenty of time to do it as Seung-nyang learned her way around the palace. The other moment that was well-played for tension, but awkward in terms of character continuity was the ending of the episode. It was uncharacteristic of Wang Yoo to place himself in such a dangerous position even under the duress of watching the woman loves under another man's power. The moment was played to please the viewers, but did not sit well with the general tone of the drama.

Also, as the resident musician reviewer, I must mention how amazing the background music in this drama. The use of period instruments alternated with a drumset heavy rock track seems natural despite the fact that this is set long before Andy Anderson existed. The music production is very clean and enhances the physical beauty of the show.