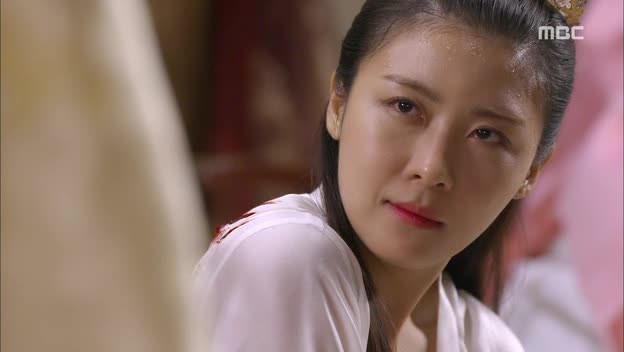 Power games are the bulk of this episode of "Empress ki". Seung-nyang has become a consort and has to establish her place in the palace. Her opponent is Tanisiri who has political power and the backing of her father, El Temur. Under her are greedy and ambitious maids. The war waged between the two women has no rules: it is dirty, bloody, and someone is bound to get hurt. With stakes like those "Empress ki" is a show worth watching.

Seung-nyang is lucky to have a few powerful allies on her side, including Ta-hwan. What makes Ta-hwan such a great ally and such wonderful story material is that he doesn't realize he is valuable. He thinks of himself as a worthless puppet. It is Seung-nyang's self-appointed job to teach him his worth and watching her do it is what I have been waiting for. There were hints of their partnership earlier, but now it is in full bloom. They are the burgeoning power couple of the 1300s with a relationship based in trust and functioning around politics. For all the romantics out there, I foresee plenty of time for real affection to develop as well, worry you not.

As for Tanisiri, she is a most worthy opponent who lusts after power. Her father, El Temur, tempted her with it and it drives her hatred of Seung-nyang and the other consorts. She is clever and ruthless, just how I like my villains to be. The intense social and political pressure of her position has sharpened her greed, wit and sanity to the point that she has become unpredictable. She is a good match for Seung-nyang. Our heroine needed a good challenge. Watching her face each of Tanisiri's attacks is a nail-biting affair and are well planned out. Tanisiri uses the natural tendency of women to run in packs and bully others to her advantage when attacking and it's exciting to watch Seung-nyang figure a way out of each mess.

A random aside about the music choice: Park Wan-kyu recorded a beautiful ballad for the OST, but it was played during a scene where Wang Yoo had his men massacre some illegal traders. The song was so oddly placed that it ruined the entire scene. It should've been played when something was happening to people we, the viewers, could cheer for.

Back to the story itself, Wang Yoo has finally made a pretty major mistake, which is a good thing in terms of the plot and his development. He's been far too perfect for my liking. An enemy from the past, Batolu (Yoo In-young), resurfaced a few episodes ago and is trafficking fake bonds and slaves. Her gisaeng house is a front for a lot of illegal activity and Wang Yoo is out to stop it - unfortunately, he gets caught doing that. While I dislike the recycling of Batolu's character, her reappearance was inevitable with the exit she made after the Silk Road battle - escaping atop a horse. Yoo In-young is also a strong actress and adds much needed spice to scenes with Wang Yoo. If they have to have her, I'm glad she's a genuine challenge for him. She might even be harboring some romantic feelings for him. That could be fun.