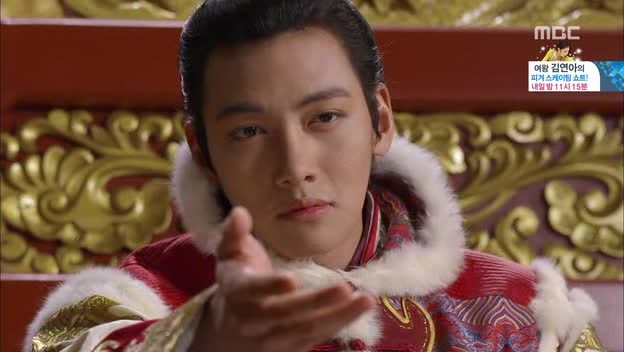 "Empress Qi" was much more exciting this episode because of an increased pace and because of constant power shifts. This power tug-of-war that breathes much needed life into the storyline. It has given the actors more material to work with because the drama gears towards being very plot heavy and skimps on the character development.

The only good character development seen is with Tanisiri and Ta-hwan because they show the most weakness and are therefore easiest to change. Tanisiri has stronger constitution, but she has been prone to hysterics as of late. The breakdown of her character is engaging stuff and makes her much more interesting that the all-too-perfect Wang Yoo. Ta-hwan is interesting because he's a cowardly ruler whose strength comes from an external source, Seung-nyang.

Unlike Ta-hwan, Wang Yoo is intrinsically motivated, he doesn't need Seung-nyang to spur him forward and do what he needs to do. He can muster the will to do it himself. The writers should use the difference in motivation for Wang Yoo and Ta-hwan to create character intrigue. The natural juxtaposition between externally motivated Ta-hwan and internally motivated Wang Yoo could be used to explore different kinds of leaders, different ways of functioning. Instead, more time is spent on the love triangle, which doesn't have much to go on because it is so politically based now. Yes, there is love, but more than that, the politics are the undercurrent of the show. I want to see Wang Yoo and Ta-hwan relate to each other politically, not just through loving Seung-nyang.

Seung-nyang is a much better character now that she has an active hand in all of the palace dealings. She is no longer a reactionary character. She is proactive in making change to achieve her endgoal. There is a strange beauty in how her path mirrors El Temur's in her search for power despite her nobler intentions. Bayan mentioned in this episode that the power El Temur achieved warped him from an honorable youth into the power-hungry elder he currently is. Seung-nyang seems to be treading a similar path.

The politicking is no longer well thought out and long planned because the situation changes too quickly. The players must think on their feet and that makes room for error. "Empress Qi" was in need of this to liven up stale storylines. These quick plans involve more people and allow for smaller roles to stand out, like Tal Tal's (Bayan's right hand man) and Jokho's (a former Eunuch of the palace.) With a world this complex, the highlights on extended cast make the proceedings that much more real.

I've said it before, but I'll say it again: the second episode of the week tends to be much stronger than the first. I'm hoping for a more equal distribution of writing and excitement between Monday and Tuesday episodes. Monday episodes are occasionally filler, a way to bridge the gap to the Tuesday episode, which is powerful enough to keep audiences on tenterhooks until the next week. Episode 31 certainly did just that.