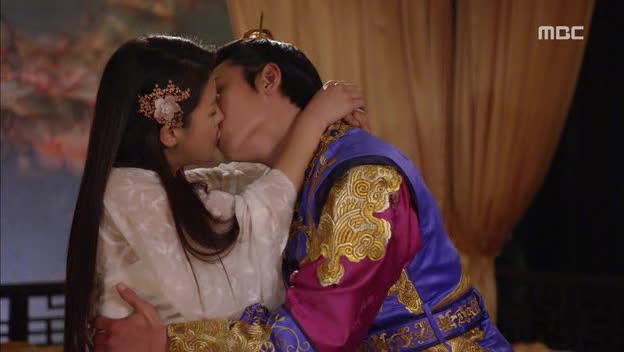 "Empress Qi" has decided to take the mythical route and the move was jarring and strange. It feels like a ploy for ratings rather than genuine plot stuffs. This shift comes along with newly defined relationships between Seung-nyang and Ta-hwan, and Seung-nyang and Wang Yoo, both of which are developed very well.

As for the mythology, it's used to show just how far Tanisiri is willing to go for revenge and power. It paints her desperation for Ta-hwan's love and her crown's power in a very stark, terrifying light. In turn, it also highlights Seung-nyang's strength as an opponent and as the titular "Empress Qi", the future Iron Empress. The special effects are cool and the way the entire subplot is developed furthers plot and character development, but the shift in tone from a non-magical to a magical drama seems like a copout writing strategy. It's like the writer was fishing for material.

What the magical turn has reinforced, however, is that pregnancy is power as much as financial and military might is power. The moment Seung-nyang gets pregnant, Tanisiri fears for the stability of "her" son's future, and through him, her own.

An aspect of the show that seems drawn out is how long certain characters remain while defying the odds. Characters like Yeom Byung-soo (played by the outstanding Jung Woong-in) has defied death so many times that it seems that it makes no sense if only because there are multiple characters doing the same thing. In a time period where death is dealt almost as easily as jail time it is illogical that a man who has made so many offensive mistakes against the power that be should be allowed to live.

Wang Yoo and Seung-nyang are no closer to reconciling. In fact, Wang Yoo purposefully fosters misunderstanding so that she'll hate him. It creates so much tension on screen when they meet with this very fresh, and very raw misunderstanding. It is an undercurrent of both of their actions while she builds Ta-hwan up to keep the throne and he secretly cuts down El Temur to regain his.

Probably the most satisfying turn "Empress Qi" has taken is the development of Seung-nyang and Ta-hwan's relationship. Her constant encouragement and support has given him strength as a leader, and his love for her has softened her to him and allowed her to really see who he is. He had the strength to give his life up for her, which is a turning point in their relationship. They are war comrades and growing closer after each battle. The intense time spent together has softened her towards him and has now made a romantic relationship possible. This has been the best developed romantic relationship in the show because it was logical as well as passionate.

Now to see where this mystical turn of events takes us. Onward!