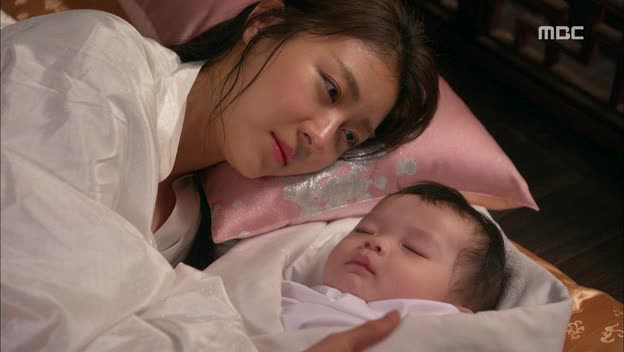 The mythological elements continue as "Empress Qi" focuses on Shamanism to further the story, which is an awkward turn because those elements are unclear. What saves the episode from being awkward is the focus on relationships: father to child, mother to child, leader to men, man to woman. It looked at many relationships that had been left undefined and examined how they have changed over the past thirty-five episodes.

The biggest relationship looked at was that of father to son. Ta-hwan feels nothing for Maha, the son he supposedly had through Tanasiri and the son who is supposedly El Temur's bloodline . He favors Ayushiridara, the son he had with Seung-nyang, and who is the historical heir to the Yuan throne. The fatherly dynamics will shift when Maha is discovered to be Seung-nyang's first born. That card has remained hidden for a while and seems ready to be exposed now - it's about time.

The other father and son relationship that hasn't received much attention is that between El Temur and Tangquishi. Tangquishi is incredibly devoted to his father who is in a state of decline through either stress or senility. It makes him paranoid and allows him to really see how devoted his son is, and has been. This relationship should've been given more screen time because it is so sick and twisted. That makes it incredibly interesting.

El Temur's decline mirrors Tanisiri's deteriorating mental state. She's deluded herself into believe Maha is of her blood, which will make the battle between her and Seung-nyang that much more fierce when his identity is revealed. There is to be another empress brought in according to press news, so I expect Tanisiri to be phased out as a major opponent for Seung-nyang. She has outlived her usefulness in the story, especially as her mental state is almost as ragged as her father's. "Baek Jin-hee" has done a standout job as Tanisiri, but her role is starting to lose some of its strength.

There are a few logic holes in the episode that are due to the Shamanism. Seung-nyang has her entourage digs holes all over the place and neither Tanisiri nor anyone else notices or finds the digging behavior strange. I would think that Tanisiri, after casting a death curse, would be more vigilant, especially because her character is meticulous despite her cracking mental state. And while she and her father suffer mental breakdowns no one else seems to notice. Has Tangquishi been running things in his father's stead? Has the Inner Court not noticed what is traversing with Tanisiri? The time skips in the episode gloss over such issues. They are a necessary evil to cover the long timeline of The Iron Empress' story.

Wang Yoo finally gets a chance to shine as he has tasked himself with taking over El Temur's main garrison and making soldiers out of beggars. He must lead men who want no leading and challenge himself in the process. This was a great opportunity for the show to really delve into Want Yoo's character, but unfortunately he remains relatively perfect. He never takes a wrong step or makes a wrong decision no matter the physical or mental strain on himself. He seems more machine than human save for when news of Seung-nyang float his way. I would like to see more of his inner turmoil.

Luckily, Seung-nyang has not stagnated. In fact, her grown in the past ten episodes has been wonderful. She has had to navigate the dangerous waters of the Yuan palace and although she puts up a strong facade, we do get to see her in her weak moments with Tal Tal. The next step is for her to show that part of herself to Ta-hwan. That would be romantically satisfying.