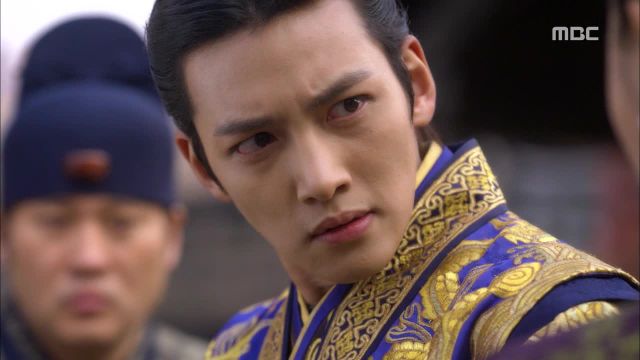 "Empress Qi" feels like it is going through the motions. It's beautiful to the eye and ear; it's full of action and excitement; but it falls short of hitting home. There is a distinct lack of emotional depth that is mostly due to the fact that there is a heavy emphasis on " what " is happening and not much emphasis on " why " it is happening.

Mostly, I want much more depth of character from Seung-nyang and Wang Yoo. The spoken motivation behind their actions is to make Goryeo and independent nation, but they don't emanate a dire need to do so, not even in private. Seung-nyang needs that emotional fuel to work behind Ta-hwan's back and against what is best for her child. Wang Yoo needs to in order to remain amongst the enemy and betray him. Their desperation is not felt. It is merely acted out through their schemes to acquire El Temur's hidden funds.

Ta-hwan, Bayan and Hudu, on the other hand, are much more relatable. Ta-hwan's desire to be an effective leader is palpable. Bayan's enthusiasm for his country drives him. Hudu's greed runs quietly beneath the surface. These characters seem fresh, even Ta-hwan who has been present much longer than Bayan or Hudu. It makes them much more interesting than Seung-nyang or Wang Yoo.

One of my favorite relationships in this show is that between Tal Tal and Seung-nyang. They are intellectual equals and respect each other. As the tides change and their races divide them, they still hold respect for one another, which prevents true antagonism and allows them to positively influence each other.

The rivalry between Ta-hwan and Wang Yoo is finally coming to the forefront because Ta-hwan is taking an active hand in politics. It pits the two directly against each other as Ta-hwan intends to annex Goryeo as part of Yuan - Wang Yoo is secretly fighting that. Their romantic rivalry has finally turned political. It's one of the most exciting aspects of the show to date, especially since Seung-nyang is very strongly divided in her loyalties.

Plotwise, there was some awkwardness as Seung-nyang and Tal Tal went about figuring out the location of El Temur's hidden treasure. It played out a bit like television paint-by-numbers and was devoid of any real mystery. The real mysteries lie in the timing of the show: when will Seung-nyang's first child's identity be revealed? Who is the leader of Eagle House? When will Seung-nyang get rid of Hudu?

"Empress Qi" is an entertaining show for all that it lacks depth. There are characters to love, ideas to think about, and plot threads to worry over. It just lacks that essential " something " that makes a drama great.