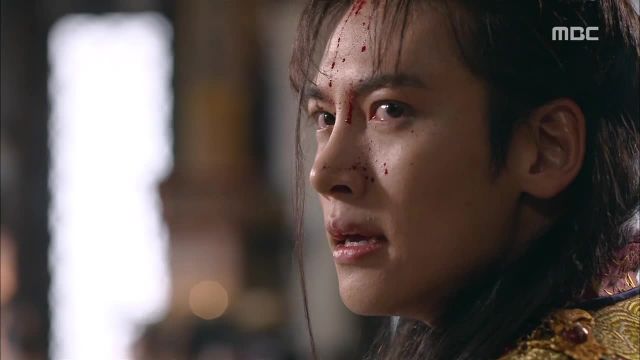 "Empress Qi" is fishing for material and for ratings. This episode included yet another person going insane and a completely jarring time jump. The show is now going for shock value rather than for quality.

The few issues that were begun earlier in the drama played out smoothly, but anything introduced in recent episodes developed haphazardly. Wang Yoo established an alliance with Yon Feisu long ago and decided to make use of the trading passage she controls to become independent of Yuan. That was a smart move. Ta-hwan's desire to attain imperial power through war, however, had no precedence. Yes, he was desperate to shed his image as an impotent ruler, but he'd otherwise been clueless about how to earn it. It's strange that he blindly follows Bayan and ignores Seung-nyang who he is clearly obsessed with.

The time jump was the biggest cop out in the entire show. It glazed over the issue of Hudu as an evil empress, Wang Yoo's reclamation of his throne and his power, and Seung-nyang's play to get her son named as crown prince. The groundwork for the time jump had not been laid and it was much too sudden a shift. The only good that came of it was that we got to see the antagonism that the dowager empress fostered in Maha towards Seung-nyang. That's a  heart-wrenching issue and one that has been skirted for too long.

Then we have Ta-hwan's mental decline. He thirsts for power and an inner strength he's only been able to attain by leaning on Seung-nyang. When he believes she is romantically involved with Wang Yoo, he collapses. It's a strange move on the part of the writers because Seung-nyang had built him up to be independently solid. His obsession with her increased so drastically that it seemed more a gimmick than a genuine character development. And, despite her conflicting political agenda, why wouldn't Seung-nyang keep supporting him to avoid such a decline? It makes no sense.

Empress Hudu has been a very steady villain thus far and the time skip completely counteracts that development. She is sociopathic and has been increasing her attacks on Seung-nyang. It would only make sense that those attacks would grow in severity. Would it take five years for her to be discovered or for her to oust Seung-nyang? Perhaps she decided to be patient. Whatever the case may be, I'm very unhappy with how "Empress Qi" played its cards this episode.