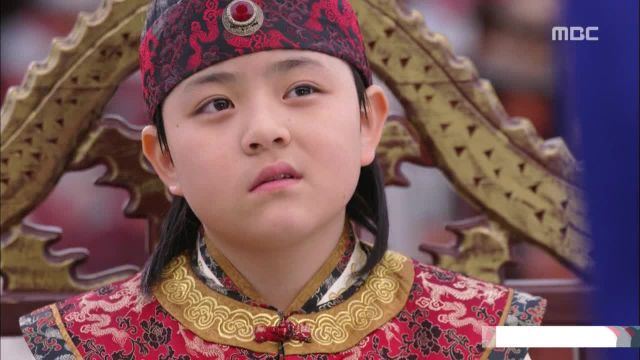 The development of young prince Maha brought this episode to life. The young actor is exceptionally strong as the revenge-filled youth who is confused by his strange connection with Seung-nyang and Wang Yoo, the two people he was raised to despise - his real parents. Most of the tension behind his character comes from the fact that neither mother nor child known of their relationship. The rest comes from the boy's suffering as Ta-hwan's cruelly rejected son despite his yearning to be accepted. That yearning makes the meeting of Tangquishi and Maha extra poignant. Both of them desire family. Both of them blame Wang Yoo and Seung-nyang for their family's extermination. The twistedness of the reunion is powerful. It also adds to my curiosity: when will his birth secret be revealed?

Also, Maha brings a freshness to the show that I had hoped Hudu's character would. Hudu has merely bided her time. She quietly enforces the antagonism between the dowager empress and Seung-nyang and sits back to watch them battle. While it is an effective tactic, it makes her a rather dull character.

Byung-soo is still around and still plotting. He is wearisome. He sticks to Tangquishi as the man works towards revenge, but has no real motivator aside from greed. He's this dramas unkillable cockroach.

This episode addressed how the war Ta-hwan waged is affecting his people. They are worn down and unhappy. It has been a long and difficult five years of fighting. Ta-hwan is afraid to end the war and be deemed an unworthy ruler. It is his greatest fear to again be the useless puppet that El Temur had made of him for so long. This is the reason for his mental break. While I dislike yet another person on the show going crazy, it does make the ending of this episode particularly powerful because Ta-hwan is not easy to predict. It also means he's selfish because he cares more about his power and image than the happiness of his people.

That is what makes him a puppet of the dowager empress and Bayan who endeavor to turn him against Seung-nyang and oust her from court. She and Bayan accuse Ta-hwan of being Seung-nyang's puppet like he was El Temur's. The irony in the situation is that everyone shows traces of being the selfish tyrant that El Temur was. They accuse each other and ignore the faults in themselves.

Then there is Wang Yoo who has been working to rebuild Goryeo as a strong, independent nation with the quiet aid of Seung-nyang and Yon Feisu. Yuan mechanizations pull Wang Yoo from Goryeo and back into Yuan, which will lead to some direct conflict. Wang Yoo has been more interesting as of late because of his interactions with young prince Maha and I'm hoping for more of the same. If he can't be an interesting character in an of himself, I will take him being interesting with the son he doesn't know he has.