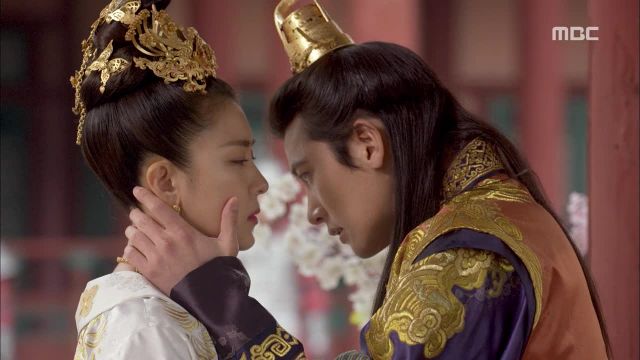 Power corrupts. It quietly slips into the most steadfast of hearts and makes them yearn for more. Not one character in "Empress Qi" has been untouched by power's temptations and they, and the nations they affect, are suffering because of it.

Ta-hwan believes that power will bring the acceptance and love he's always desired. He was rejected when he was younger by his family, including the dowager empress, because he was weak and powerless. As emperor, he puts all of his faith into Bayan because he believes Bayan is the last person who genuinely supports him. He thinks war-bought honor and glory will win him the love of his starving people. In the same vein, he obsesses with Seung-nyang, thinking she will give him the familial love and unconditional affection he has always craved. Ta-hwan's issues are such a wonderful human dilemma, but they've been developed terribly. The time jumps sidestep important moments of development, like how he became a delusional alcoholic in his quest for power and acceptance.

Seung-nyang has been fighting the allure of power. Tal Tal and Wang Yoo have both warned her about how thoroughly power corrupts. Though she fights it, it still permeates her psyche. Her power lust is tempered by the xenophobia that Bayan and the dowager empress propagate in the palace and amongst the people. That pain keeps her grounded. It also addresses the age old issue of intolerance against people who are different. In this case the heads of Yuan are prejudiced against the people of Goryeo. In this episode, she makes use of Ta-hwan's deteriorating health to take charge of the government and push things in the direction she wants. While that direction is towards the betterment of the people's dire situation, it's still a power play that she greatly enjoys. She has acquired the taste for power and has not been able to abandon it.

Jo Jae-yun as Golta, Ta-hwan's eunuch, has always been a dark character. He dislikes Seung-nyang and anyone who makes power plays against Ta-hwan. As it turns out, he is the leader of Eagle House, the independent trading company that acts like a financial kingpin in the Yuan and Goryeo economies. While the twist in the plot is clever, his motivations are ridiculous. He wants money to be the ultimate power rather than Yuan or Goryeo nobility. It would be a decent motivation if it wasn't delivered like a cartoon villain's simplistic speech of evil.

Aside from power, there was one plot thread that was both beautiful and sad. Maha and Wang Yoo finally spend a few moments together before Maha passes. The two actors have a wonderful connection, and, for the first time in a long time, Wang Yoo's character has seemed tangible. He came off as more than a stone figure. He acted like a flesh and blood human being.

"Empress Qi" still has a chance to develop some of the wonderful themes it has introduced: need for acceptance, the abuse and corruption of power, family. Whether it will do it or not is the question. I hope it will.