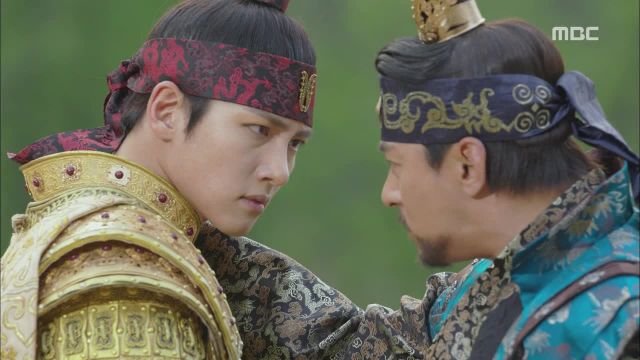 The extension has made "Empress Qi" struggle for material. It has introduced a new character and is playing out a scheme that should've been given much more time. What this penultimate episode has done is fleshed out the emotional ranges of Wang Yoo and Seung-nyang, both of whom have been tightly bound for the majority of the show's run.

There has been a new plot twist as of late. Golta, Ta-hwan's trusted eunuch, is the head of an illegal financial operation that works selfishly and often against the betterment of the Yuan people. Golta is interested in power and money, and intends to use Ta-hwan (via slow poisoning) as a mean to an end. This is a juicy idea that because Golta abuses Ta-hwan's blind faith in him. Ta-hwan has already lost faith in so many people - this could break him. Leaving this for so late in the drama with so little time to develop is a shame. Especially since Golta hasn't been well-developed as a character. He's a one-sided villain with a simple thirst for hunger. I like my bad guys to have a little depth.

Also, "Empress Qi" tends to extend the lives of its characters beyond believability. Despite being shot, run through with a sword, or impaled by a staff, multiple characters have survived against the odds. Byung-soo, all of Wang Yoo's most loyal retainers, and even Wang Yoo himself have managed to defy the odds time and time again. While this is television and some dramaticism is expected and needed, to elude death so often is just unbelievable. It's hard to make it work within the darker contexts of the show. Only now, when "Empress Qi" is nearly at its end do people meet their ends in overly dramatic ways that are meant to fill time rather than be truly impactful. The only truly poignant death was Wang Yoo's because, for the first time in ages, we get to see real emotion on his face and we get to hear him talk about how he feels about Seung-nyang. The same goes for her. She expresses how she feels in a real and relatable way.

The death of Wang Yoo was actually very tastefully done. He allowed Ta-hwan to take his life in order to protect Seung-nyang. It was the ultimate sacrifice for love on both mens' parts. Wang Yoo gave up his life for love. Ta-hwan, for the first time, protected Seung-nyang by his own hand. She has always protected him. At the end of their star-crossed relationship we finally get to clearly see and hear how they all really feel. Emotions have run high through each of the fifty episodes that have passed. While some emotional reservation an dishonesty is necessary to propagate a story, too much leaves the viewer unclear as to the genuine emotions of the main character. This happened a lot in "Empress Qi".

This episode also convinced me that Seung-nyang is better when she's action oriented. Ha Ji-won is powerful and effective when dressed in finery and dealing with complicated political maneuvers. But she and her character are at their best when they are in action, personally putting plans into effect. Seung-nyang was so physical at the beginning. After she entered the palace she became a political creature, which made her lose some of her verve.

With one episode to go, I hope to see a resolution to the Eagle House issues and Ta-hwan's manipulated health. A coup has been planned during the past two episodes, which is short notice for such a large political happening, and it will be rushed either in execution or in its quashing. Let's just hope that the finale doesn't feel too rushed because of the hurried addition of new material. We've already reached the events of the opening of the first episode, the story really doesn't have time to go much father.