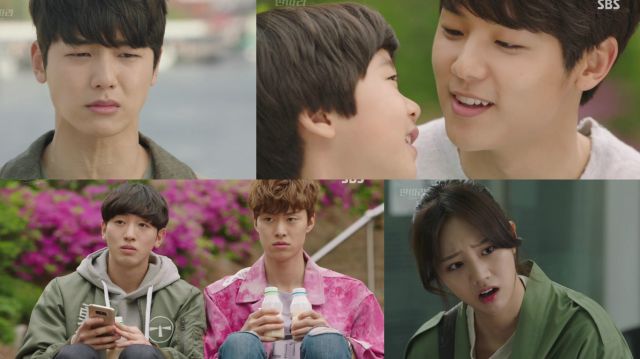 "Entertainers" comes in at 7.4% and delivers heavy feels, buckets of tears, and a whole lot of family fuzzies. The band of misfits that makes up Seok-ho's indie rock band has come together for the love of music, and because they found something special in each other. Sure, there are a few things that I questioned along the way, but Directors Hong and Lee paired with Writer Yoo deliver a powerful hour of entertainment.

This drama doesn't waste time with keeping secrets. It reveals them fairly quickly and then revels in the fallout. Seok-ho's beloved Jinu turns out to be the true culprit behind Seok-ho's new protege Ha-neul's sexual assault accusation. Two boys that Seok-ho loves as his own - a situation that forces Seok-ho to choose one or the other. It's a parent's nightmare. Although Seok-ho is not a parent, he does fill that role for these young men (and Yeon-soo and Kyle), and we see it in how he cares for them, and also in how he worries he can't do right by them. His atrocious behavior as part of KTOP shielded him in an armor that kept him distanced from the pain he caused. The suicide of the singer that he pushed to the limits was the chink in that armor - the heartbreaking stories of his misfits completely shattered him. And that's where this episode finds Seok-ho, broken and lost. His misfits must find him and bring him home.

Now, I love the family feeling of this drama, but one thing that bugs me is that we didn't spend enough time with the band as they grew close. We didn't see them fight and rehearse and share meals together, not really. That would've helped me get behind them even more. But at the end of the day, Writer Yoo knows how to deliver poignant emotional moments. She also has a penchant for ending episodes on Seok-ho's crying face, or alternately, his beaming face. She likes to focus on emotional breaks or shifts, but I'd like a different episode ending just to throw me for a loop.

This episode was also full of tears. While I was watching the drama, I was swept away by the emotion. Only now that I write about it do I realize that there wasn't a dry eye in the episode. All of the band members and those around them have hit rock bottom. They've no where to go and they need each other. There is Yeon-soo, the young, tender-hearted father; the firecracker tempered Kyle, and wrongly accused Ha-neul. Not to mention Min-joo who wants to strike out on her own, and Seok-ho who struck out, was cast out and now must find a way to stand again. Green is the only character who isn't quite as filled out as the others. Her role is defined by how much she cares for Ha-neul, and by how she becomes a surrogate noona/older sister for the boys in the band. She has the strength and wherewithal to bring together these boys and make them feel comforted, loved, and like they've come home when under her roof. That's powerful. But I also want her to stand alone apart from her role as caregiver. I don't want that to equate with her being a love interested for Seok-ho or a love rival with Min-joo either. In a similar way, I'm looking for more from the resident evils: KTOPS's CEO, Joo-han, and Ji-yeong. They are 1-D characters driven by selfish desires. I want more. The best villains are multi-layered.

The music of the show is another strength. Singer/songwriter sounds are scattered throughout, giving the drama an "indie" vibe just like the indie band in it. It's just lovely. And then there was the horror soundtrack and sound effects hysterically juxtaposed with the carnival music as Green checked out a potential rehearsal space with landowner Byun Gil-joo (Ahn Nae-seong). Ahn was absolutely hilarious as the wily man and according to previews for tomorrow he's going to stick around!

Am I looking forward to tomorrow's episode. You bet I am!