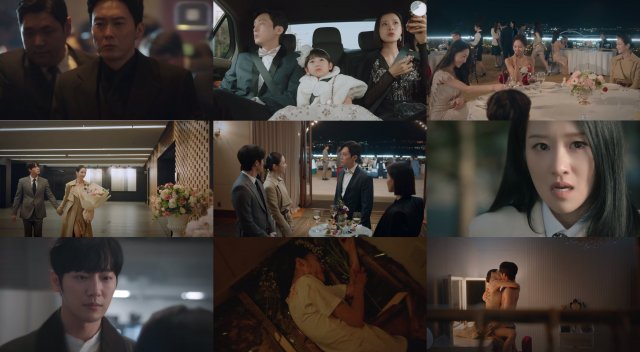 Good timing has a lot to do with whether any television drama is successful. "Eve" has a lot of questionable strikes against it in that regard. For starters, as the opening bloody golf ball scene indicates, this is an unsubtle class conflict prestige soap opera in the style of "The Penthouse" when as was seen with "The Penthouse 3" that kind of storytelling has been going out of style. "Eve" also has the dubious honor of being Seo Yea-ji's comeback show, following revelations of her being a terrible girlfriend and really just a terrible person in general, behaving to production staff in a borderline abusive manner.

Yet the dystopian premise and even Seo Yea-ji's recent scandal-laden history actually rather work to the favor of "Eve" coming out in the wake of two fairly distressing political elections. It would seem that almost nothing has meaningfully changed in South Korea's political culture over the last few decades. That subtext may explain, to some extent, how "Eve" opened with strong ratings of 3.625%. Although that does not explain whether you, dear reader, should watch it or not.

It took awhile for Rakuten Viki to finally put "Eve" up, but it's well worth the wait. Ra-el (played by Seo Yea-ji) is a surprisingly compelling character, an enigmatic, attractive dancer. The closing scene with her husband Jin-wook (played by Lee Ha-yul) is surprisingly hot. This is despite the clear implication that their seemingly passionate relationship is all just set-up for Ra-el's exceptionally convoluted revenge scheme.

Seo Yea-ji is alluring enough in her sinister gaze it's hard to even blame the apparent villain, corporate heir apparent Kang Junior (played by Park Byung-eun) for being so easily seduced by her. I write apparent villain because it's pretty clear that our actually villains are his wife, Ms. Han (played by Yoo Sun), and her father, the powerful Prime Minister Han (played by Jeon Gook-hwan). Both of them are aggressively bad, unpleasant people.

Yet I still don't especially like Kang Junior, mainly because he's so bland. And that works to the favor of the drama's revenge-driven point, which is that even if Kang Junior himself is relatively inoffensive, the fact that he benefits from South Korea's class system and all his family members being awful on his behalf means he's just as unlikable as they are. Much like Ra-el, I just want to watch him squirm- and I fully expect that's exactly what "Eve" is going to deliver.