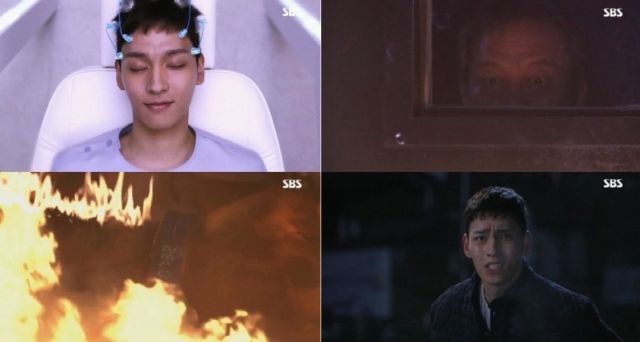 Conceptually, "Exit" is a satire of the illogical means by which bad dramas attempt to brute force a happy ending since there's no way to resolve the conflict plausibly, especially when too little time remains to do so. At least, this is the most reasonable way to interpret how Kang-soo finally relocates the mother who abandoned him decades ago with an ambiguously abusive father. Every step of the way, said mother simply placidly reassures Kang-soo that everything will be all right.

Then we get a flash back to the real world, and see that Kang-soo's actual father is badly stressing out over volunteering his son for the false happiness program, having realized the possibility of lethal side effects. Although I'm actually inclined to agree with In-sook (played by Nam Gi-ae) that the risk is probably pretty low. And besides, Kang-soo and Jeong-man are still suffering massive financial problems in the real world, so every little bit helps.

Jeong-man's sincere fatherly concern over a problem he created is what real flawed love looks like. The direct contrast with the fake Jeong-man of Kang-soo's dream world is striking. In general Kang-soo's "family" in the dream world is characterized by an unwillingness to say or do anything that will offend Kang-soo in any way. I loved the cliffhanger at the end of episode three where Kang-soo makes an extreme test of this behavior and...sure enough, Seon-yeong is all smiles again.

That all is just far too much when contrasted with the bitterly combative Seon-yeong of the real world, a woman with an actual personality. In the dream world she's just window dressing, a literal male fantasy. This further calls to mind other long form dramas. They start off with a strong-willed female lead who over time just...loses interest in anything not related to romance with the male lead. By sanitizing her, productions always kill all of her appeal.

Of course, "Exit" is so short that this kind of analysis can only go so far. Even the epilogue is quite abridged, although I felt the comparison of the pictures got the point across very well. Kang-soo can have the fantasy world, or he can try to accept and hold on to what little he actually has left. Considering how a lot of Kang-soo's financial problems stems from a questionable decision to blow a lot of money on a shady detective agency to locate his mother...I think, in the end, his final choice is understandable.