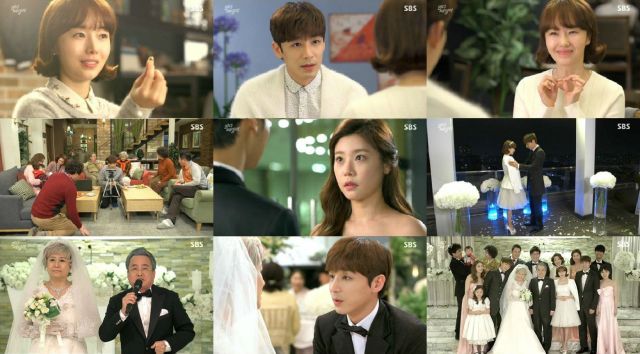 The cliffhanger is resolved mostly unsurprisingly and uninspiredly. This much is to be expected given that "Family Outing" has now gone into full epilogue mode. Kkeut-soon has dementia, and as we see, it only really gets worse as times goes on. The main interesting hook here is that the dementia element actually does end up getting used in the larger storyline rather well- we finally get to see the full animated short than Dong-seok made, and it's probably not quite what you're expecting.

In literal terms, Kkeut-soon's character motivation was simply to come back to Korea to bequeath the fortune she had acquired over a lifetime. Considering how dysfunctional the family was at the beginning of the drama, in many ways Kkeut-soon's arrival seemed too little too late. They needed a matriarch, and Kkeut-soon fulfilled this role not through respect but by using the power of the almighty dollar to cow them all into submission.

While this is all rather obviously cynical, the ultimate resolution ties in rather well with Joon-hee's character arc- that it doesn't matter if the initial motivation was selfish if in the long term Kkeut-soon learned the true meaning of family. And yes this is incredibly corny, but that's really the whole point. Love isn't about judging people for past mistakes. It's about learning to be helpful and supportive to people who have been helpful and supportive to you. Kkeut-soon single-handedly solved the family's financial problems and taught them how to evade these traps in the future- for that she deserves gratitude.

Especially in presented execution here, the overall message is surprisingly conservative- even moreso than last episode. I'm surprised Dong-seok's work gets international acclaim not because it's bad but because I actually go to these festivals and believe me, judging panels tend to have very little interest in traditional values. The finale in particular eschews marriage in the modern sense- it's a moment that has impact precisely because it symbolizes the bond of an entire family, not just two romantically inclined lovers.

The whole of the episode is about the characters finding peace and comfort along those lines. It's really quite sweet, and inspired me often to think of my relationship with my own family members in a similar vein. It's a pity the drama up until now has been so incredibly inconsistent, but the last bunch of episodes have been so strong they might well be worth watching on their own without the context of the previous ones. They have a simple, heartfelt message that really does resonate quite well.