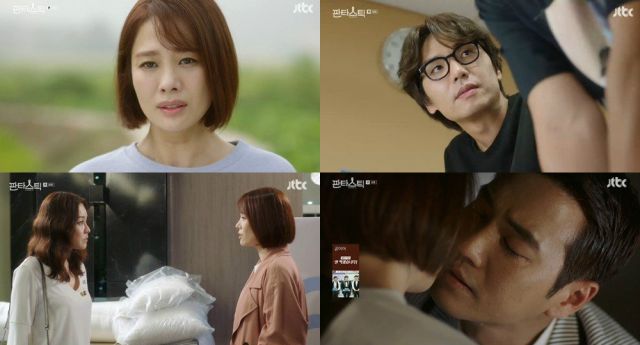 A brief flashback fills us in on the question of how much Hae-seong knows, and also when he knew about it. It's noteworthy how just because Hae-seong is discretionary with the information he has doesn't necessarily mean that So-hye is happy with all the implications. While on the surface level it can seem rewarding to be dealing with a stand-up guy like Hae-seong, on the deeper level it can seem rather unfair if one and only one partner is making noble sacrifices.

That's another of the basic ethical principles at work in "Fantastic"- that it's better to give than to receive. Which dovetails fairly ironically with Seol's adventures, that deal with her married family acting so generally obsessed with image that at one point her husband even manages to fail to finish the photo op. It's an especially sad scene because it's one of the few times we see Seol out and about not wearing a hanbok. But that element, too, is all about image.

This is all more of the usual, really. It does get to be a bit hard at points to discuss the plot in "Fantastic" when conceptually it's so bare-boned. The drama is so enmeshed in the question of character relationships that even at the halfway point we know surprisingly little about the show-within-a-show. Although really, generic action dramas aren't exactly known for being interesting on the narrative level anyway. I find myself wondering whether this aspect of "Fantastic" was a preemptive shot at "The K2".

Background details are also worthwhile. I found myself rather perturbed at the wall decorations in Sang-hwa's room. They make more sense when we consider that Sang-hwa gave up a degree in law to make fictional thriller TV shows, and also that she probably can't read English that well, but still, those posters were kind of freaky. They're difficult to reconcile with the generally pleasant unremarkable scene that unfolds inside.

Meanwhile, Jin-sook (played by Kim Jung-nan) appears to be the drama's all-purpose villain. Whenever some contrivance is needed to arbitrarily mess up the show-within-a-show and make life generally inconvenient for So-hye, Jin-sook is there. Whenever we need a clumsy reminder that Seol hates her married life, Jin-sook is there. It's odd how even though Seol's husband is the more obvious culprit, in general it's Jin-sook's villainy that I can better remember. Ah, if only there were a little more depth to it than that...