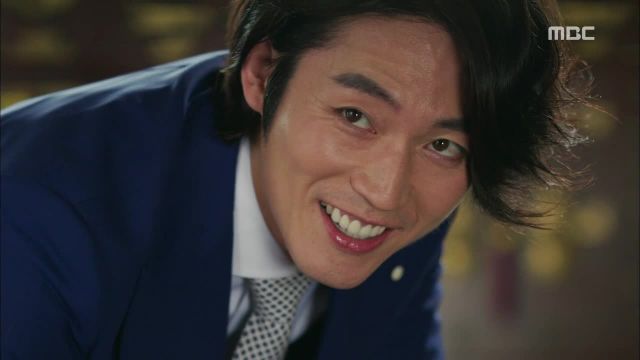 The first episode of "Fated to Love You" was fun, whimsical, and full of the zany Taiwanese drama style while still remaining true to Korean drama style. The characters were wacky, but endearing, and the plot moved quickly towards the event that sets of the main couple's journey.

From the get-go, "Fated to Love You" bolted out of the gates, giving us some over-the-top humor with male lead Lee Geon (Jang Hyuk) that was a milder version of the drawn out scenarios that Taiwanese dramas favor. These fanciful, dreamlike scenarios were peppered throughout the episode and made it a light-hearted watch. Jang Hyuk has no reservations as he portrays the arrogant and boisterous Geon with a too-loud speaking voice and laugh - it was spot on with the style of the show. Then there is the small, adorable Jang Nara playing Kim Mi-young, a woman who is always overlooked and mistreated because she is too nice to stick up for herself. Despite her character's diminutive personality, Jang Nara has an ability to draw the eye without filling the screen with too much energy.

Wang Ji-won as Geon's first love Kang Se-ra had little screen time, but the production team made use of her extensive ballet background and had her dance, which was beautiful to watch. Using an actor's real-life talents is always a treat. Choi Jin-hyuk as Daniel, the second male lead, had only two scenes so we have yet to learn more about him other than he is good-looking and a DJ. Most of the episode was geared towards the fateful meeting of the main couple in Macau.

The interactions between the main couple were sizzling with chemistry and funny to boot. Jang Nara and Jang Hyuk played off each other, timing dialogue and physical reactions for the greatest impact. The pairing between them is solid, backed by acting experience and refined talent.

I'm hoping that the interfering parties like the second leads and the businessmen who don't like Lee Geon won't prove to be so annoying as to be tedious as tends to be the case in many dramas both Taiwanese and Korean. A good balance with humor would help to keep that tedium to a minimum. "Fated to Love You" is off to an enjoyable start.

"[HanCinema's Drama Review] "Fated To Love You" Episode 1"
by HanCinema is licensed under a Creative Commons Attribution-Share Alike 3.0 Unported License.