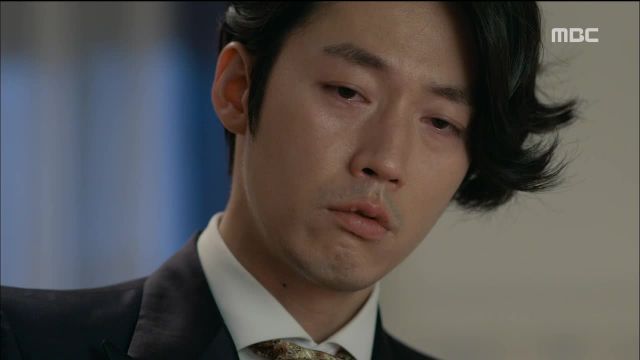 All the happiness in "Fated to Love You" wasn't fated to last any longer. Episode 11 was as heart-wrenching and intense as the Mi-young/Geon couple has been sweet for the past ten episodes. It was a difficult turning point based on the wearied plot trope of amnesia, but it was well-played.

Geon loses his memory and spends the hour struggling to get it back and greatly hurting Mi-young in the process. While it was hard to watch him hurt her, the rocky path he takes back to finding his memory is a great turning point for his character. It seemed as though the amnesia had done a factory reset on his emotions for Mi-young, gearing them back towards Se-ra, but it hadn't. Watching him come to that realization was skillfully written despite the use of the amnesia.

Se-ra came out as the sort of second lead I dislike - catty and selfish. She was better before the amnesia incident because she seemed to care more for Geon than herself, but that reversed this episode. What does make her different from most second leads is that she is genuinely trying to win Geon back, regretting her decision to choose ballet over him. I'm hoping that this side of her wins out in the battle against the cattiness.

Daniel, on the other hand, has decided not to try and woo Mi-young yet, which is quite nice because second male leads often push too soon. Instead he is there to help her get through Geon's amnesia and ill treatment of her. He is still antagonistic towards Geon, but his treatment of her is admirable.

Yong had a small moment near the beginning of the episode that made me want to see more of him. He's starting to truly care about his brother and his brother's well-being despite his mother's grooming otherwise. That is an important relationship to be cultivated and perhaps Yong and Geon can do that on this side of the amnesia incident.

But really, this episode was Geon's as he rediscovers his relationship with Mi-young and how he feels about her. Mi-young, as usual, quietly takes the emotional beating as she faithfully and doggedly waits for him to remember. This time, however, the waiting is out of loyalty and love for him rather than an obligation. She hasn't turned to noble sacrifice yet because she was ordered by the doctor to give him space and time to recover, and she didn't quite obey those orders.

Since it's only episode 11, we know there is more angst and drama to come, but I'm pleased that the show took care of the amnesia quickly. While it convinced Geon of his feelings for Mi-young, it also complicated things with Se-ra, with his company, and with their marriage regarding the divorce contract. There are a lot of things to work out in the next nine episodes - I'm looking forward to it.

"[HanCinema's Drama Review] "Fated to Love You" Episode 11"
by HanCinema is licensed under a Creative Commons Attribution-Share Alike 3.0 Unported License.