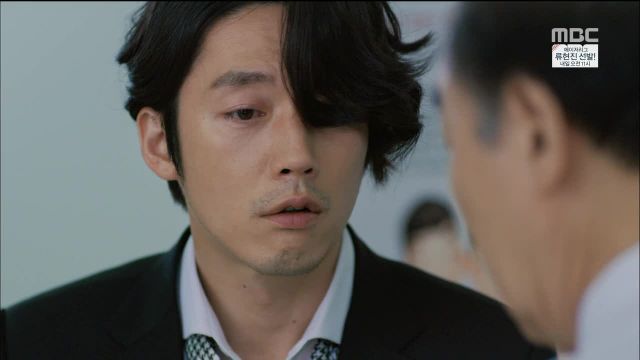 "Fated to Love You" has taken a complete turn into darkness. The intensity of the turn was shocking, but very well executed. The episode could have been overworked and overly dramatic. Instead it was timed with finesse that maximized the major events as well as the smaller moments.

The pacing and cinematography of the episode were its strengths. While the acting was on par with the excellent direction, it has always been strong. In this episode, the direction rose to equal the powerful performances. Voiceovers smoothed transitions and allowed for two events to happen simultaneously. The camera storytelling was effective and edited well for maximum emotional impact.

As for the actors, Jang Hyuk has not been as remarkably as effective as he was this episode. He is a quality actor, but he improved upon himself this episode. There was so much he said without words that gave enormous depth to Lee Geon. He especially reacted well to the other actors he worked with. Although his character made some imbecile choices, Jang Hyuk makes the viewer believe in his sincerity.

Mi-young has been, until now, a reactionary character. When tragedy strikes, Jang Nara milks the angsty moments for all their worth, reacting to the painful tide of events with overwhelming intensity. It makes the moment that she decides to take her life into her own hands even more powerful, and makes the time jump a less of a plot escape and more logical. I'm looking forward to see how effective her decision was and whether or not she truly took ownership of her life.

Another strong point of the episode was the supporting characters. Both Mi-young's mother and Geon's grandmother support not only their children, but their spouses. They are honest, sincere, and admirable caregivers. It's such a appreciated change from the shrieking matriarchs so often found in drama.

The plot itself relied on a horrible occurrence that happens much too often to couples. It is good that the show addresses the issue, and that it did it respectfully. Many women have suffered this and it's a heart-wrenching issue. Compounded with that issue is Geon's venture down the path of good intentions. He leaves Mi-young to save her from his genetic degenerative disease. It was a disappointing move, especially since this couple has been so communicative until now. The lack of communication was deflating.

The secondary leads were peripheral characters. They didn't have much development because they were overshadowed by the main couple's issues. Daniel did provide Mi-young's impetus for change. There is plenty of time to develop them.

This was a strong episode and an example of angst done right. While I'm not a fan of the choices Geon's character made, it seems to have been a necessary evil to jump start the next chapter of the story. Let's go with that and see what happens.

"[HanCinema's Drama Review] "Fated to Love You" Episode 12"
by HanCinema is licensed under a Creative Commons Attribution-Share Alike 3.0 Unported License.