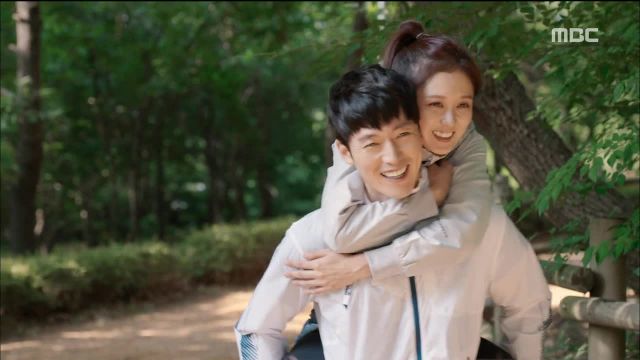 This episode was very slice-of-life in that it focused on a narrow scope. It dealt with two issues: Geon's illness and how it affected and continues to affect his family; and, Mi-young's mother inability to approve of their marriage. The simplicity of the plot made screen time for some very sweet interactions of our main couple with each other and with their loved ones. It could also be indicative of very little plot left to be had, but "Fated to Love You" is always at its best when it is adorable and winning.

While having a parent oppose a marriage is nothing new to drama, having a mother as level-headed, open, and caring as Mi-young's mother is rare indeed. She protests for fear of her daughter's hard life with an ill man. Despite the protestations, she lets both of them know that she truly cares for Geon. It's such a rare trait that it stands out as a highlight, not only in this episode, but throughout the drama. Song Ok-sook is perfect as the tough-love mother who spouts harsh words and has softness in her eyes.

What changes Mi-young's mother isn't all of Geon's athletic tricks. (Those tricks were humorous and a way to show off Jang Hyuk's martial arts skills and fill some air time.) It is when she sees Geon and Mi-young together, smiling and happy. Watching her melt at the sight of her daughter's happiness was worth all of Geon's goofy, time-filling antics.

Another mother who comes around is Yong's mother, the supposed mistress of Geon's father.  She makes the mature decision to give Geon his father's journal which states that she was not his mistress, but his caregiver. It was that indirect admission that relieved her of the stress that made her such a viper and made her into a woman Geon could thank. I love that this show highlights the little things that warm a person's heart and changes them for the better. Handing Geon the journal opened his world to his father's suffering and helps him decide not to run from his disease like his father did. Having that journal also inspires Geon to thank Yong's mother, which softens her to Geon in a way that even surprises her. Again, this show makes the most of the smallest moments.

Then we have Daniel and Se-ra discovering that they are siblings. It is achingly sweet, but that sweetness is made a bit bitter by the fact that the timing of the discovery is much too late to be effective. It is anticlimactic instead. It is the biggest disappointment in the show. While "Fated to Love You" worked with Geon's noble idiocy quite well, the discovery of the siblings relationship was woefully mishandled. It sat on the shelf and gathered dust, only to be collected when it was yellowed and faded.

In the end, this show is about feeling good. It's about a love that is sweet and pure. It's about caring for someone so much that it makes one a better person. "Fated to Love You" does this very well. I expect more of it in the finale.

"[HanCinema's Drama Review] "Fated to Love You" Episode 19"
by HanCinema is licensed under a Creative Commons Attribution-Share Alike 3.0 Unported License.