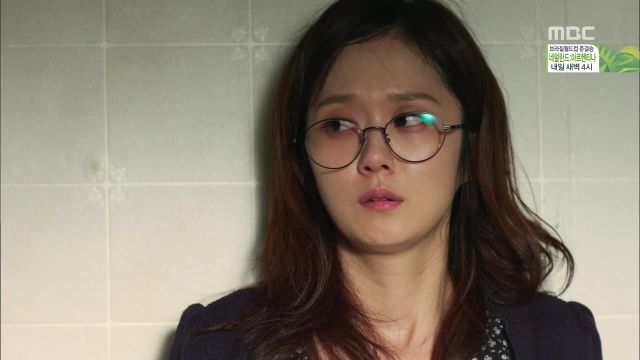 "Fated to Love You" gets cuter by the episode. What makes it so fun is the mix of the serious and the goofy ways the characters deal with problems. The Korean drama's take also is more concise than the original, shortening some of the drawn out sequences that Taiwanese dramas prefer. This gives the show a brisk pace that suits the startling discoveries made this episode.

What adds to the urgency of the pace is that the fun Geon/Mi-young pairing is not only full of chemistry, but that they are on opposite sides of a political battle. His company is putting many people on her home island out of work, which is an issue sure to crop up any episode now. The premise has been well laid as an underlying tension that only makes the reveal of Mi-young's pregnancy even more shocking.

I liked the way the show handled the pregnancy. Jang Nara did a wonderful job working through the steps of realization, disbelief, double checking to be sure, feeling terrified, and then deciding to tell her family. Part of how Mi-young worked through her shock was to take her worries to a priest, who happened to be Daniel playing a game of hide-and-seek. He was touched by her story as he pretended to be a priest, which makes me think he has a similar story in his life. Also, true to Mi-young's character, she wanted to shoulder the burden alone, but her family won't let her.

Back to Daniel, he has connection with Geon's family as does a new character, Lee Yong (Choi Wooshik), who plays Geon's devious half-brother. If Geon doesn't marry in a year, Yong gets to inherit his position. Yong isn't a very interesting character so I'm hoping the talented Choi Wooshik will bring the best out of him. If not, hopefully interactions with Daniel and Geon will make the character worthwhile.

Se-ra continues to expect Geon to wait for her, which is very selfish of her despite her genuine feelings. But her presence and constant phone reminders of her affection tether Geon to her, which will put a definite damper on the developing relationship between Mi-young and Geon. It speaks to anyone who has a first love that is difficult to let go.

While Jang Nara is a shining actress who wonderfully portrayed Mi-young's plight, it is Geon's character who is full of surprises and brought the most to the episode. He is arrogant with a horribly boisterous laugh. He doesn't think about the people on Mi-young's island who he is might make jobless. However, when he sees Mi-young suffering, he is truly kind to her, showing that sympathy and thoughtfulness are a part of his psyche. He isn't a typical chaebol who is perfectly cold in every way and needs a woman to thaw him. He is already full of warmth. It's just that the warmth is covered by ambition and familial pressure.

"Fated to Love You" is wonderful in that it can take serious material and not undermine it while keeping the general tone of the drama light. Thus far, it is a neat and very fun adaptation that is taking on a life of its own.

"[HanCinema's Drama Review] "Fated to Love You" Episode 3"
by HanCinema is licensed under a Creative Commons Attribution-Share Alike 3.0 Unported License.