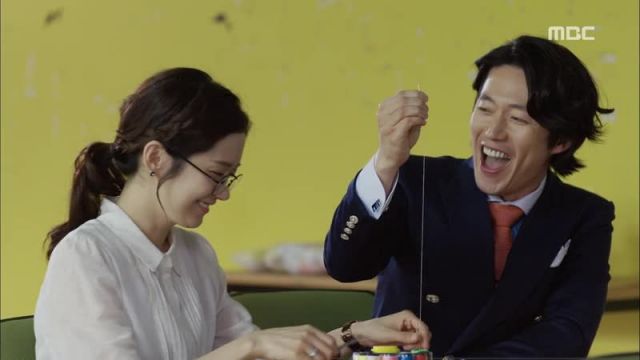 Family is key to "Fated to Love You". It is what brings the characters closer and makes this show hit so close to home for every viewer. Cohabitation hjinks have begun as well as burgeoning feelings on the part of the most reluctant character: Gun. He and Daniel warm to the kind-hearted Mi-young as she becomes more involved with becoming a mother.

Gun has grown up in a broken family with dead parents, his father's mistress and son, and a very demanding extended family. While his grandmother has been there for him, he has missed familial warmth since childhood. It is this lack that leaves him vulnerable to Mi-young's devotion to their unborn child and Mi-young's mother's genuine affections towards him. It is the earnestness of emotion that draws the characters together and elicits positive reactions from the male leads.

Se-ra still hasn't had a large role except to be the "girl Gun loves". The few scenes she appears in tells us that she loves Gun in return, but that she is quite self-centered. Her reappearance will be a necessary roadblock for the married couple. Hopefully she will prove to be more than just a roadblock and have character development worth investing in. The same is true for Yong, Gun's half-brother, and Yong's mother. They are 2-D characters who have little depth and function as purely utilitarian plot tools. To develop Yong would add much more to the story than to merely use him as an obstacle for Gun to overcome.

As for Mi-young, she continues to grow stronger as her confidence in becoming a mother grows larger. She has begun to speak up more against Gun's unilateral demands in order to protect her baby and its future. Along with this growth in confidence comes increased faith in Gun as a father and a man in her life. This is paralleled with Gun's new appreciation for Mi-young and the reversal of his nasty business decision to sell off her hometown's factory that he'd promised to save. This reversal comes just as Mi-young learns that he sold the factory in the first place. It is a huge blow to the faith she'd placed in Gun. The timing of these revelations was well written and brings the couple to its knees, forcing it to confront the issues inherent in the shotgun marriage and unexpected pregnancy.

Daniel is an ambivalent character. His relationship with Mi-young could be painted in one of two ways: either romantically or platonically. It is purposefully kept unclear at this early stage in the game, which ups the tension and keeps him shrouded in mystery. Also, he has kept his real identity from Mi-young, choosing to prolong her belief that he is a priest. Like Gun, he decides to do the right thing by her and reveal the truth, but it is blocked. All development has reached a decisive turning point by the end of this episode, which will shift the drama into a new direction. Again, this is due to the clever pacing.

The humor continues to make "Fated to Love You" charming and adds to the plot rather than stalling it for a few laughs. That is this show's strength in general: it is able to include multiple elements without detracting from one to promote another. Part of this is based on the original script from the Taiwanese drama, and part of it is the writing of the Korean adapter.

The acting continues to be stellar and full of lively chemistry. Jang Hyuk shone as the slowly, painfully, growing Gun who is learning to open up to Mi-young and the new family she and the baby promise. I'm looking forward to that future as well, problems and all.

"[HanCinema's Drama Review] "Fated to Love You" Episode 6"
by HanCinema is licensed under a Creative Commons Attribution-Share Alike 3.0 Unported License.