"Fated to Love You" keeps up a lively pace into this seventh episode - it's also a lot of fun. Mi-young and Geon learn more about each other, learn that they like spending time with each other, and learn about the process of parenthood. They have a lovely partnership forming that will no doubt be trampled with with Se-ra comes back into the picture.

While this episode began with a big misunderstanding, through humor and Geon's earnestness, not only do Mi-young and Geon grow closer, but Geon earns the respect of his in-laws. It also gives the writer a chance to give more depth to Mi-young who struggles with how to understand Geon's seeming betrayal. It is a writing strength that she is able to both keep her mild-mannered demeanor and firmly push Geon away when she thinks he sold out her island to a landfill company.

The misunderstanding leads to a heartwarming resolution and reunion of the shotgun couple as well as a wonderfully rich scene where Mi-young's sister gives birth. The birth incorporates so many lovely story elements. Geon shows off that he's been reading up on birth and fatherhood; Mi-young can see his intelligence and devotion to her sister and family; and, we get to see Geon hold his niece in his arms, a foreshadowing of his first moments as a father. The entire ordeal brings him closer to Mi-young in a way that firmly sets them up for when Se-ra will come and rock the boat.

There is a minor character who was completely hysterical this episode, Yong's mother (Na Yeong-hee), as she took advantage of Geon's sympathetic morning sickness and kept opening the fridge to overwhelm his olfactory senses with offensive smells. It was such a petty, childish moment that compounded with the fact that Geon and poor Mi-young were nauseated by the smell of the open fridge. The humor in this show continues to be over-the-top, but still manage to fit in with the rest of the more serious material. 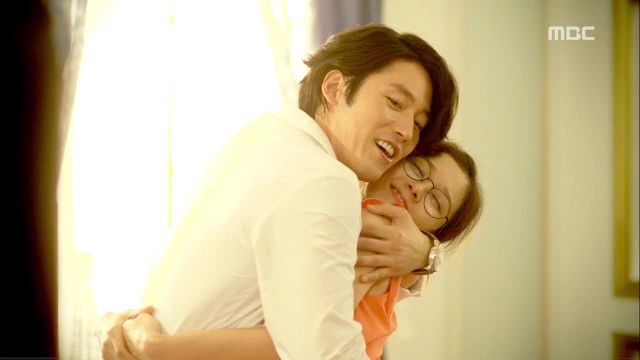 Daniel also came clean this episode, admitting he is not a priest, and instead took on the role of an "oppa" or older brother. We'll see how long he wants it to remain that platonic, but for not his protectiveness gives Geon a run for his money, especially as they have signed a contract together without having put a name to a face. This should be a fun rivalry. I'm not quite sure how to anticipate the rivalry Se-ra will provide for Mi-young, but at least the one between the men is amusing.

The best part of the relationship between Mi-young and Geon is that as they pretend to be a couple, they find they actually enjoy it. It's a backwards courtship. Again, it's all due to clever writing which can be attributed to the original drama, and to the wonderful adaptation.

"[HanCinema's Drama Review] "Fated to Love You" Episode 7"
by HanCinema is licensed under a Creative Commons Attribution-Share Alike 3.0 Unported License.