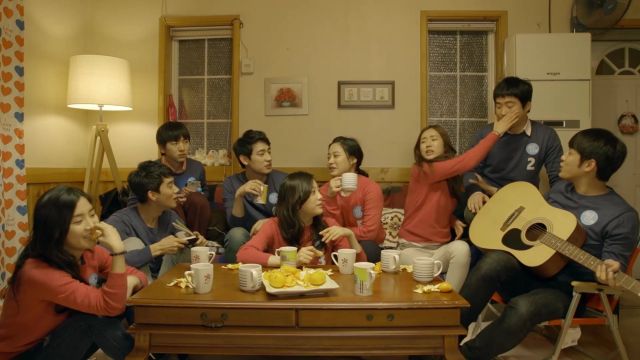 When we last left off, all the characters' basic motivations toward matchmaking had been pretty clearly established, and some of them have been more successful than the others. We start off with a couple of the men trying to figure out why they've been doing so poorly. They do in fact get an explanation, but it's oddly unsatisfying. Mostly this is because, much like this drama's done so far, the commentary here mainly just seems to be on how arbitrary and mostly useless the dating process.

If any word describes the second half of "Flirty Boy and Girl", it's tired. The men have done almost all the work so far in terms of trying to attract a potential mate, and the question is very seriously brought up here as to whether it was actually worth the effort. We actually know surprisingly little about the women in question, and several revelations are brought up here that end up giving multiple men cold feet.

Simply for instructive purposes "Flirty Boy and Girl" continues to showcase a very impressive message. Ladies, if you've ever wondered why a guy suddenly loses interest after he's spent so much time trying to charm you, this is pretty much why. Personality is important, but all we really get in the dating process is the guy's best impersonation of what he thinks an attractive person is, while the girl tries to avoid giving any useful information at all until she's decided he's charming enough to let her guard down.

Honestly the presentation of all this is pretty morbid. Fortunately plenty of jokes yet remain to keep the atmosphere from getting too dark. "Why would you possibly need this information" is probably my favorite, but other than that it's just generally contextual. Facing the end of the game show, no one wants to go home alone, so several characters resort to desperate ploys that sometimes work and sometimes don't.

What's nice about these final gestures, though, is that for the first time we're seeing grand romance being carried out on a personal level. In one case the scheme actually requires practiced choreography and coordination from several other unrelated characters. Everything about the romance in "Flirty Boy and Girl" has, to this point, been so deliberately practiced and cynical that these sparks actually come off quite persuasively even as they're obviously corny and dumb.

While somewhat lacking in the crazy energy that made its first half so engaging, the latter portion of "Flirty Boy and Girl" also has its charms. There is, at the very least, genuine dramatic tension here about whether any of the couples are even going to get together at all. That's a very rare feeling to get from romantic comedies, which are almost never able to convincingly sell the fear that maybe none of this is going to work out. That fear being a very real and present part of the modern courtship process, it's subsequently quite refreshing to see a drama, even a web drama, be able to tackle such emotionally tense issues with deliberate and fun gusto.