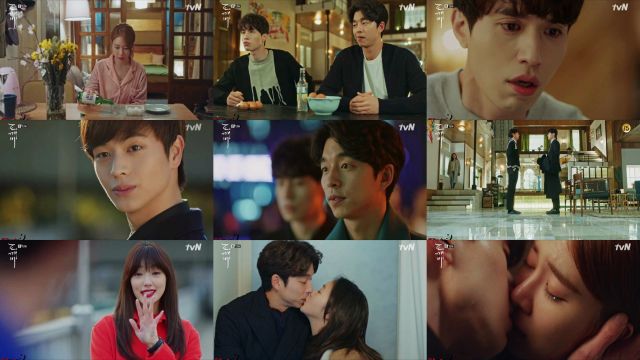 In the originally broadcast form on Korean television, this episode of "Goblin" contains a helpful recap explaining the major events from the previous episode. These are some help when it comes to major plot points, like how memories of past lives can be restored by touching a Grim Reaper (?), and also how New Year's Eve festivities have been driving the major emotional events lately. This does admittedly make for a fairly romantic backdrop, limited though it may be when romance is a subordinate concern to plot. Which is once again, all this past life stuff.

Oddly enough rather than the actual content of the backstory I was more left wondering whether there's really any ethical sense in holding people morally responsible for their actions in past lives. For that matter, what are the ethics involved in trying to force someone to restore memories of their past life? Isn't the whole point of reincarnation that it lets you start with a clean slate? It's a little unfair for the Goblin to be running around holding current incarnations personally responsible for stuff that happened several centuries ago.

But as usual magical worldbuilding takes me down an unpleasant mental path in "Goblin". We still know very little about how most of these supernatural powers actually work, so when the Goblin unexpectedly fails to subdue an adversary later on, there's any number of explanations as to why which were not properly foreshadowed. I think. It's really hard to tell when writer Kim Eun-sook is intentionally trying to create foreshadowing or whether the events in question are just random coincidences.

The whole deal with the green ring, for example, is really obvious for explaining who the Grim Reaper and Sunny were in their past lives. I'm sure it was present in all flashbacks up until this point. But without proper emphasis, all the major revelations still feel like they came out of nowhere. A late scene where the Grim Reaper and Sunny explicitly role play their past lives is helpful, mainly because I've been worried about another bait and switch.

Flashbacks overall are kind of disappointing, because the flashback backstory tends to be much more straightforward than the present-day story with several completely different kinds of overlapping magic. The big change with Eun-tak and her ghost friends at the end, for example, is more mystifying than it is dramatic because who knows what caused it. If we find out next episode, we'll be lucky.