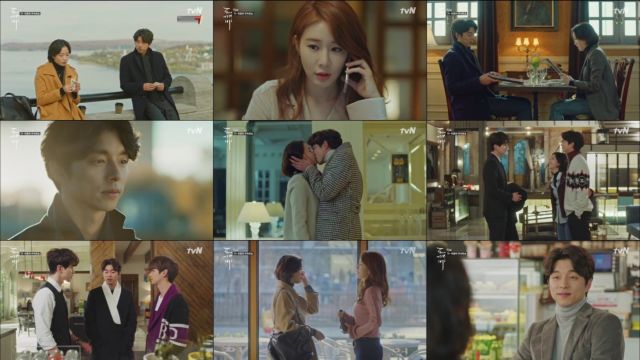 So the recap this time is just the Goblin's full death scene from episode thirteen. Admittedly, it looks pretty great. The fading away to light particles was a nice touch, and the acting truly heartfelt. For all the flaws "Goblin" has a complete story, the direction is pretty consistently top-notch. But there are limits to how far the occasional excellent scene can go. Aesthetic excellence notwithstanding, I'm at a bit of a loss as to why "Goblin" is reminding us of Kim Sin's death when he didn't actually die.

Continuity is present though. In Eun-tak's latest journey to the magical land of Quebec, apparently everyone remembers the random Korean teenager they met from ten years ago, because I guess the divine forgetfulness magic doesn't work on white people. I'm honestly not...trying to be that flippant here, it's just a little impressive how quickly "Goblin" is able to contradict itself.

Fortunately, since the overall purpose of the drama is well-telegraphed, I'm never especially outraged by "Goblin". All of these scriptwriting shenanigans are designed for the sole purpose of trying to get the Goblin and Eun-tak back together again. That much is not a hard sell, as Gong Yoo and Kim Go-eun have excellent chemistry. The decreased creep factor of Eun-tak being in her late twenties and thinking of the Goblin as Kim Sin rather than the immortal goblin also helps.

The Grim Reaper (or should we be calling spirit formally known as King Yeo now?) and Sunny do not fare quite so well. There's a very interesting sequence where the Grim Reaper observes the interactions between two sad departed souls. The emotions on display are touching because they're simple and easy to understand, and timeless, with great overall style. Whereas the main obstacle keeping the Grim Reaper and Sunny apart is just the worldbuilding. It's uncanny how oftentimes, even when "Goblin" is very good, I just end up being reminded of the plot holes.

I know from past experience that the fantastical logic used to explain what happens to the Goblin and the Grim Reaper in the final episode could literally end up being anything, and that there's no possible way it could be satisfying. So I'll just have to do my best to enjoy all the good things in "Goblin". Which is pretty much everything aside from the script and product placement, but it's surprising just how annoying those two factors alone can be.