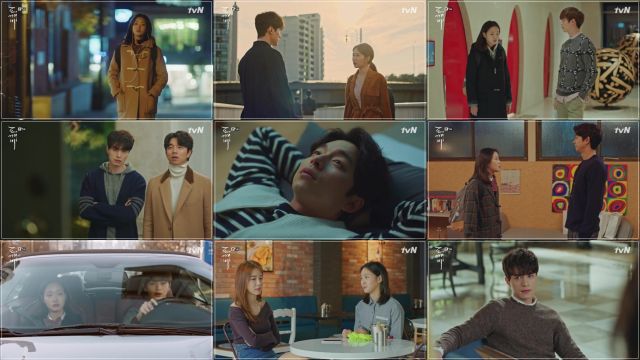 So the absence of names for the lead characters finally becomes an issue. Eun-tak seems to have only just now figured out that "Goblin" is just a nickname she came up with. I'm not sure he even actually is a goblin, come to think of it. Meanwhile Sunny (played by Yoo In-na) is in the awkward position of being the Grim Reaper's love interest yet they can't have even the most rudimentary of conversations. So naturally, their scenes go nowhere, much as Eun-tak's part-time job as Sunny's sole employee at a chronically empty restaurant also go nowhere.

It's only through through weird contrivances in the plot that "Goblin" can ever go forward. Consider how the event that finally propels Eun-tak into the same home as the other lead characters revolves around a rather strange request from a ghost that Eun-tak manages to fulfill in about the least efficient possible way. Poor Deok-hwa, always at a wit's end trying to make sense of problems far beyond his level of perception.

One point of credit I have to grant is that director Lee Eung-bok has somehow managed to make Eun-tak a generally attractive leading lady, even as she is a high school student. In all fairness the adult Eun-tak we get a glimpse of here has pretty much the same personality with just a more refined physical appearance. So in that sense, success. I can see how the Goblin is slowly becoming bewitched by Eun-tak's sheer sense of...optimism.

The other characters are diametrically opposed to Eun-tak's way of thinking less as a matter of philosophy and more because they're so thoroughly trapped in routine it's a struggle to break out of it. While the Goblin and the Grim Reaper are the main obvious examples, Deok-hwa lacks purpose. Sunny is just plain bored. Eun-tak is able to light up a room just by entering it and giving commands, which people obey more out of inertia than because they actually have to or want to.

None of this really gives a satisfactory answer to the question of what exactly "Goblin" is even supposed to be about. Writer Kim Eun-sook has this real talent for creating petty conflicts out of petty nothingness, only to dissolve these into the common squalor of the Goblin and the Grim Reaper's roommate squabbles. It's hard to to grasp at points how the story is literally about the "Goblin"'s impending death. Which fits, since he struggles with that too.