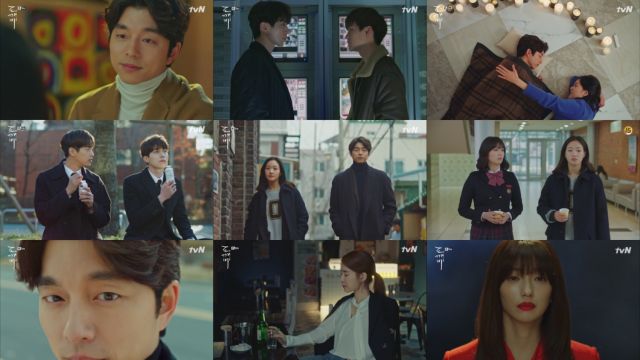 The latest adventure between the Goblin and Eun-tak has resulted in massive property damage and multiple witnesses to obviously impossible superhuman feats. So naturally, the only valid response to this is...a highly elaborate and not terribly convincing cover-up, because the production team doesn't actually care about the worldbuilding except to the extent it can be used to justify wacky special effects. That's "Goblin" for you.

I'm somewhat morbidly fascinated at how "Goblin" is able to take some fairly mundane plots and give them epic undertones. Note how the flashbacks take place in widescreen. This is inherently nonsensical. Either your "Goblin" viewing device is intended for widescreen or it's not. Director Lee Eung-bok is forcing us to watch the drama incorrectly by switching between the two. The ultimate purpose? Because widescreen looks cooler and more cinematic, even when it's nothing more than empty black space at the top and the bottom.

And yet between all these cinematic setpieces we have ads. I'm not referring to the normal ads, but the ads which now take place within the drama internally. There is an entire sequence here that is just the Goblin repeating advertising copy for several of "Goblin"'s sponsors, the only excuse being that it's a joke about why he can't have a real job. Which I might have believed, except only a few scenes earlier there was that ridiculous incident with the sandwich. Out of context that looked like a very bizarre commercial whose only saving grace was the illusion of self-parody.

I can never figure out where "Goblin" stands when it comes to being serious or not. The very production design is enough to radically skew the interpretation of certain scenes one way or another. Observe how fond memories of the Goblin and Eun-tak together, which were funny at the time, somehow become an ode to their epic love story when being overplayed by suitably morose music. Again, this might have worked were it not for the sheer scale of repition in story movements.

...Well that's not really fair. "Goblin" never really goes anywhere, but it also doesn't repeat itself. Every time Eun-tak hangs out with a new ghost they're always discussing a completely new set of problems and we always learn something new about Eun-tak as a result. But what any of this has to do with the main story is at best unclear. It's only at the cliffhanger that we finally get a sense of genuine dramatic urgency. Who knows how convincing that will be going forward though.