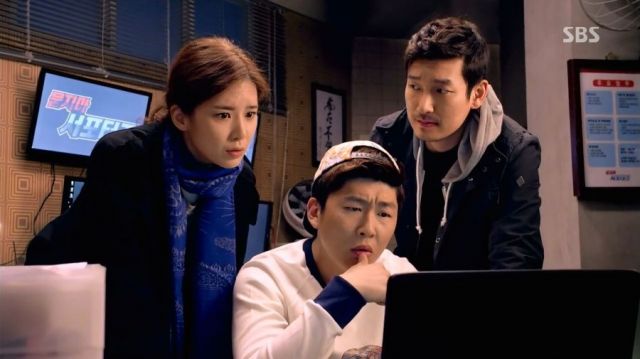 Lee Bo-young's previous SBS hit is undoubtedly a great series. In a medium mostly about surface treatments, a series that respects its plot and characters like "I Hear Your Voice" did is rare. When the actress was cast in "God's Gift - 14 Days" , a series about a mother's fight to save her daughter, many fans saw another brilliant series in the making. Sadly, this industry's risk aversion, adoration of the male element and flawed filming system turned what could have been a masterpiece in its medium into just another entertaining, but not top quality series.

When a little girl named Saet-byeol (Kim Yoo-bin-I) is kidnapped and later found drowned in a lake, her mother, Kim Soo-hyeon (Lee Bo-young) decides to take her own life. As she jumps into the same lake, a man named Gi Dong-chan (Cho Seung-woo) is also being thrown in it by a group of thugs. When they come out, they realize they have traveled 14 days into the past. Remembering a mysterious woman who spoke to her about this happening, Soo-hyeon finds Dong-chan and together they try to stop the events that lead to Saet-byeol's death, as well as discover how they are both connected to the big picture that starts forming. The first thing to say about "God's Gift - 14 Days" is that it is not a bad series. It is not great, but it is definitely not something bad for drama standards. It has some great acting, the mystery is kept alive until the very end (although the supernatural part is never addressed), its pace does not slow to the point it becomes boring and its production quality is quite nice and atmosphere appropriate for its genre. There are some interesting characters, different types of relationship dynamics explored and it is generally a very busy and entertaining show, if killing some time is what one wants to achieve. However, the series fails in some ways in its two most important elements. The mystery and how it presents it to the viewer and most importantly, by losing sight of its premise and original element of appeal.

The thing about mysteries is that they need to be airtight. They need to present just enough to the viewer for them to stand a chance at making legitimate guesses. When a mystery is solved, the viewer should be able to piece it all together and when they go back, they should realize they already had everything they needed to figure it out. The series stumbles in the sense that the writer seemed to be creating some things as they went along, even changing things already established, just to serve their new plans.

This is evident very early on, when a scene that was presented with a seemingly insignificant character played by an extra earlier in the series is changed to serve the developments. During later episodes, the creators re-film this scene and replace the actor there with one of the main actors and his character, to reveal the person we had seen in that process was in fact this character we have known. This is cheating viewers out of their chances, but also shows the creator has no idea what they are doing further down the road. It is very likely the series is filled with such issues, some obvious the first time around, some probably to be discovered for anyone who watches it again.

But this drama's worst betrayal of its own premise and fans is how it handled its female lead and her story. What started as a series based on 'The Story of a Mother', featuring a strong woman out to save her child soon started to shift. By the end, slowly, painfully, it had been turned into a worship of the male lead, even going as far as to show him altering the original tale to make it about a Knight fighting to save the little girl. In perhaps an allegorical twist, this just showed the overall intentions of the production. The female character went from being the one that mattered and moved the plot to a plus one. She turned into the typical reckless and hysterical woman who had to be stopped, brought to her senses and constantly saved by the male lead whose own story took the wheel. She was not only used as a punching bag, getting kidnapped, beaten and generally abused by men just to become a damsel for the hero to save, but she was eventually pushed aside. What started as female lead centric proceeded as a work with two leads and eventually became male lead centric. The same thing happened with her daughter, whose fate ended up being just another piece of the big picture in the male lead's world. Her life turned into just another plot device. It is basically striking women down for daring to be the heroines in their own stories.

And this shows another big problem of this industry and its live filming system. Give audiences what they demand, even if it means not staying true to your work and messing up its coherence. The ending of the series also has a lot of people angry, which is perfectly understandable. Rushed, unfinished and with conflicting characterization, the ending was simply a culmination of the downfall this series brought upon itself. As mentioned earlier, there are many parts of "God's Gift - 14 Days" that are entertaining and it is by far not the worst thing out there. But a series which fails at the two things it was supposed to do well and which started as something with all the elements it needed to become exceptional, but ended in a half-baked attempt at what it originally tried to do is a frustrating sight. Sadly, it is also not a surprising one in this medium.