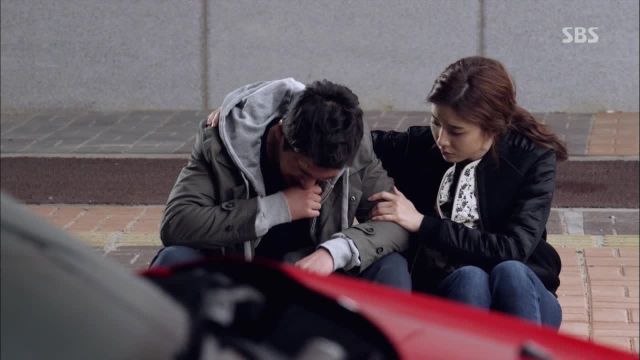 This show is getting good. Really good. It is finding all the right emotional beats and playing them for all they're worth. Our good guys get a leg up on fate, but fate is right on their heels. The truth of the past is what will stop Saet-byeol's death, but discovering that truth is what is difficult.

Dong-chan firmly believes in his brother's guilt - he believes Dong-ho killed Soo-jung, the love of Dong-chan's life. Soo-hyeon isn't so sure and the doubt she casts on the case spurs Dong-chan into doing some serious thinking. The picture that Yeong-gyoo took from Tae-oh's house start an in depth search for the people in the photo, and the concerted search efforts and the fallout of that search make this episode emotionally explosive.

One of the people in the picture is Soo-jung. While he's busy coming to terms with this newest connection, and the fact that his brother may not have killed Soo-jung, Ji-hoon is twisting the truth to make Soo-hyeon doubt Dong-chan. It casts more suspicion on Ji-hoon who may be evil, or he may be blackmailed. The same holds for Woo-jin. The mastermind behind Saet-byeol's murder may be blackmailing both men and may have killed two people in the picture, and made a third go mad. I admit, trying to figure out the mystery is half of the fun of this show.

The other half is watching the amazing emotional development of the characters - especially Dong-chan. A few scenes have absolutely no dialogue, but they don't need it. The actors, cameras, and music say everything that needs to be said. Or when Dong-chan finally confronts his brother about why he killed Soo-jung. Both brothers reel from the outcome of the argument - their pain is palpable.

I'm pleased with Soo-hyeon who has finally begun to use the head on her shoulders to think everything through. Lee Bo-young has delivered a consistent work, but she wasn't aided by the writing of her character. Now, however, Soo-hyeon is a 3-D, relatable character.

The episode ends of a very tense note, one of the best cliffhangers thus far. The past few have been quietly introspective while this one is a complete nailbiter. "God's Gift - 14 Days" has hit its stride.