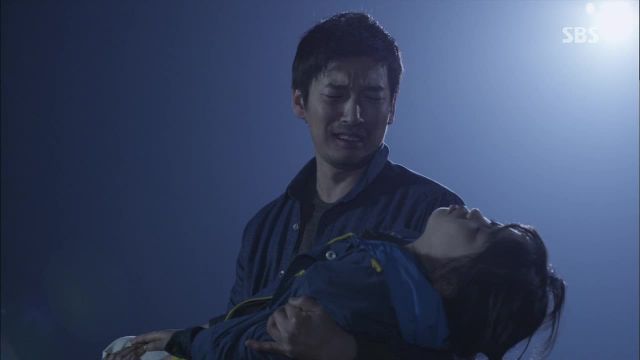 "God's Gift - 14 Days" stayed true to its volatile, twisting, turning, surprise-filled personality throughout each episode of its run. Secrets fueled this drama and they kept viewers on pins and needles. In fact, secrets lasted until the very last moments of this final episode, which left very little time for any real resolution.

There is a difference between open-ended finales and incomplete finales. "God's Gift - 14 Days" has fallen into the latter category. An open-ended finale leaves the futures of the characters to the viewers' imagination, but resolves all major issues. There is a sense of general understanding and satisfaction. An incomplete finale leaves the viewers scratching their heads with multiple questions in their minds and a feeling of unease.

"God's Gift - 14 Days" failed to answer some very important questions at its end. Although Saet-byeol was ultimately saved, what happened to her family unit? Ji-hoon was a good man who became twisted by ambition and greed and we saw nothing of him after he begged the secretary of state for Saet-byeol's life. Or Woo-jin, the dirty cop who was Soo-hyeon's first love. He fell into a coma after sacrificing himself to protect Saet-byeol and we hear nothing of him. Even Dong-chan, arguably the strongest character in the show, received an unsatisfactory end. We are left to decide whether he lives or dies after he decides, yet again, to sacrifice himself a loved one. On top of that, he is not in his right mind - he has been poisoned with alcohol, which makes him delusional.

The idea that he would die to save Saet-byeol means that he and Soo-hyeon have not trumped fate. They've played directly into fate's hands. The cafe shop owner said that "one had to die for the other to live", which is what fate wanted. Instead of Saet-byeol, Dong-chan (I assume) gave up his life. But this means that a life was still lost and fate still won. Had Dong-chan lived, he and Soo-hyeon would've triumphed over fate.

Then there was the late redemption for so many characters or a complete lack of punishment for others. Woo-jin, Ji-hoon, the rich grandfather who mooched off Dong-chan, and the tattooed kidnapper all decided to do the right thing by Soo-hyeon and Saet-byeol by the end of the series, but we don't see the repercussions of their terrible decisions. The secretary of state and the president's wife who masterminded the cover up of the president's son supposedly were punished for their actions, but again, we don't see it. We don't see a lot of things that we should've. It left the show on a very inconclusive note, which is quite sad as the rest of the series was, while not perfect, exciting, and full of wonderful material.

But these quibbles are with the ending. For the most part, "God's Gift - 14 Days" was a strong show. The characters were solid, easy to relate to, and related extremely well to each other. Dong-chan's interactions with his family were extremely poignant, especially when he learned that his brother had gone to jail to save him. The acting was strong, and Cho Seung-woo was a standout as Dong-chan. The thorough inclusion of talented child actress Kim Yoo-bin-I was a large factor in the strength of the show. She was able to keep up with the adult cast and was easy to root for. She was someone we wanted Soo-hyeon and Dong-chan to save.

The running themes of family, love, honesty, and discernment between right and wrong were all represented well, especially the idea of family. Dong-chan, his mother, his brother Dong-ho, and his adopted nephew Yeong-gyu made up a make-shift family that was broken, yet yearned to be whole. The undeniable love and connections between the four was one of the major emotional points that fueled the drama. The reluctant, painful love that Dong-chan had for his family spilled over towards Saet-byeol and Soo-hyeon who are part of a broken family themselves. The entire show is driven by people needing to mend relationships, to keep loved ones safe, and to re-forge broken bonds. In the end, the revelations of truths heal the families in "God's Gift - 14 Days". Those truths should've been the final impressions that the show made on us. Instead, it chose to leave us incomplete.

Even though I am dissatisfied with the ending, The show kept me on my toes throughout its run, always managing to infuse a new twist into every ending. There were a few too many coincidences and evil killers, but even those fit into the the mystical two weeks that had been allotted to Soo-hyeon and Dong-chan to change the future. What was frustrating was how Soo-hyeon's hysterics were so frequent and the fact that they went unpunished. Such behavior usually detracts from a person's ability to succeed at the task at hand. Her task was saving her child from death - hysterics were distinctly counterproductive despite the fact that Lee Bo-young was magnificent in her role.

In the end, "God's Gift - 14 Days" was a captivating drama that was beautifully put together, well-planned and infused with fast-paced excitement. Unfortunately it's finale didn't fit into the mold that the rest of the show presented. It wasn't well-planned or satisfying like the endless, scintillating mystery of the murderers and politics and kidnappings that carried us through sixteen episodes. But the drama itself was strong despite its foibles.