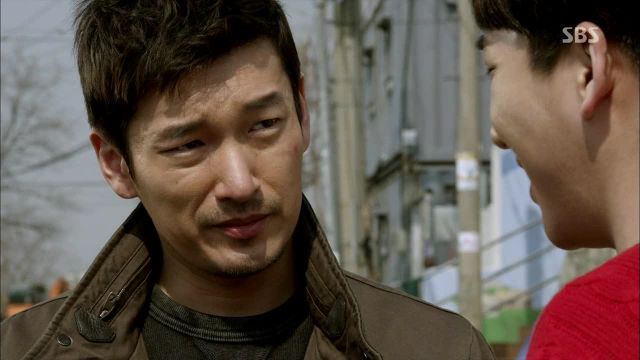 We delve into Dong-chan's past and along with it we discover how intricately connected everyone is. This episode was the strongest episode yet, full of brilliant acting, great plot development, and many startling revelations that double as new questions.

Dong-chan is such a pivotal character. He is unpredictable in nature, but also seems to be innately good. He holds a lot of resentment and guilt inside, which drives him to extremes and makes him fascinating. He walks a line as he aids Soo-hyeon in saving Saet-byul. In contrast, Soo-hyeon is straightforward. She is concerned with saving her child at any cost. There is no mixed motivation there. Watching such a purely motivated character deal with all the surprises is an intrigue in and of itself, and Lee Bo-young enhances that. Also, Soo-hyeon is finally gathering her wits about her after her rage and fear-fueled chase of who she believed to be the murderer. She's finally starting to make the changes I hoped for, the logic is finally starting to settle in, and she's becoming the methodical hunter chasing after her child's future murderer.

Back to Dong-chan. His relationship with Yeong-gyoo has had this sad, tender quality to it for the past five episodes and now we know why. He bears a heavy guilt towards the boy who he considers family even though they are not blood related. Yeong-gyoo considers Dong-chan, Dong-ho, and their mother to be his family, which redefines the definition of family from biology to love and caring. I love how Dong-chan learns from the boy despite Yeong-gyoo's impaired intellectual functioning. I also love how caring for Yeong-gyoo was the reason for so many small interactions that create the intricate web of relationships in "God's Gift - 14 Days". Because Dong-chan cares, he mentioned his nephew to the third murder victim before she died and she gave him a sweater she knitted for the son she gave up to an orphanage. That victim turned out to be Yeong-gyoo's mother and, in the end, Yeong-gyoo gets to receive the sweater his mother never thought he'd get.

These connections are so well-wrought that I must applaud the writing and planning for piecing this all together. It was a bit rough in the earlier episodes, but the payoff in this episode was well worth the wait.

Then there is a relationship that is a bit heavier to explore, and that is of Ji-hoon to the murderers he defends. We receive several hints that he was involved with the case that caused Yeong-gyoo's mental impairment, that he was involved with the sentencing of Dong-ho, that he is still involved with unsavory characters who blame him for creating murderers with his ideals. Ji-hoon even performs a few very suspicious actions this episode, which spawned numerous questions. Is he good? Is he bad? What does he have to do with the bad guys he puts away? Why did he lie to Soo-hyeon? Was it to protect her? To protect himself? Or to protect a criminal? Does he remember Dong-chan? The list goes on and again, the fact that I have these questions is a testament to solid writing. These are the kinds of suspicions that make a mystery drama so exciting!

One side story I've been really enjoying is that of Na Ho-gook and his tumultuous relationship with Dong-chan. This episode he wrestled with his conscience and the fact that he may lose his job for shooting someone. I love that this show takes the time to explore such a deep issue: taking a life. There are murderers running amuck in this show and it's good to take a step back and explore what that really means. Ahn Se-ha is really pulling off a nuanced performance.

Tied up in Dong-chan's former police career is Woo-jin with whom there still brews a whole lot of animosity. There is nothing simple about the antagonism between them and, like Soo-hyeon's and Ji-hoon's relationship, exploring the broken camaraderie between Dong-chan and Woo-jin will be an adventure.

We thought that we were getting answers, but they were really just the start of more questions. That means I'll be waiting impatiently for next week! Hurry!