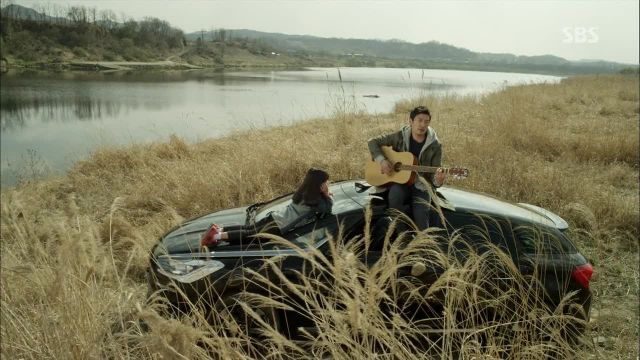 As we head into the second half of the drama, a huge new piece of the puzzle has been found in "God's Gift - 14 Days", but it only raises more questions. The web that was complicated before became even more complex. Everyone is connected and everyone has intentions that are difficult to read save for Soo-hyeon's.

In place of those intentions, Soo-hyeon has some learning to do: what motherhood and life is really about. She finally sees how the little moments in life equal real happiness. She enjoys her time with her child, something that I'd been wishing for her since her strict handling of Saet-byeol in the first episodes. This realization seems to calm her and allows her to think more rationally, which she desperately needed in order to sort her way out of this horrible battle with fate.

Saet-byeol has a much larger role this episode as well. Her impulsivity ties all the pieces of the "God's Gift -14 Days" puzzle together. She is friends with Yeong-gyu; she likes Snake and Lee Tae-oh (No Min-woo); she is her parents' child. Through each of these connections she causes a ripple effect that branches out to everyone else. Kim Yoo-bin-I is strong in her role despite her youth and charming to boot.

Snake's Lee Tae-oh strides to the forefront as the large puzzle piece that simultaneously clarifies and deepens the mystery. He is connected to the grandpa that mooches off Dong-chan and to Dong-chan's dead girlfriend. His older brother's death is somehow connected to Dong-ho. What makes his addition to the mystery so effective is No Min-woo's acting and the fact that the audience gets to solve the mystery alongside Soo-hyeon and Dong-chan. Before the story was too convoluted and hinged on Soo-hyeon's impulsivity. Now that she's become more rational, it feels much more like a solvable mystery.

Speaking of mystery, like Ji-hoon's role filled out a couple episodes ago, Woo-jin's role became a lot meatier when he cast suspicion over himself by burning evidence. It raises a few very important questions: is he Saet-byeol's killer? Or does he have an ulterior motive for working against Soo-hyeon and/or Dong-chan? Is the information that we have learned about the man who most likely killed Saet-byeol really information about Woo-jin? It's exciting stuff and I commend the show for finally coming together so strongly.

Dong-chan continues to be the star of the show with how well Cho Seung-woo portrays him and with how strongly the character is written. When he learns of the connection between his murdered girlfriend and the possibility that she may have something to do with Saet-byeol's death, Dong-chan's reaction is powerfully subdued. The knowledge is overwhelming for him and how he copes with results in one of the most beautiful scenes of the show thus far. It makes use of Cho Seung-woo's background as a musician and musical actor and pairs it with the beauty of fatherly affection for Saet-byeol. He sings Saet-byeol a song on the guitar gifted to him by his dead girlfriend, Soo-jeong, and sees both the smitten Saet-byeol listening, and his memory of Soo-jeong as well. He sings of love, his love for Soo-jeong, and his newfound love for little Saet-byeol.

The filming of Dong-chan's fight scene against the probable murderer in the rain atop a roof was brilliant. It was cleverly choreographed and made effective use of film technique, slowly down the action and speeding it up into a powerful punch or kick.

The turn in this show was wonderful. It brings back a little mysticism as well, which I've been waiting for. It gives Soo-hyeon the first leg up in her seemingly useless struggle against fate. It also gives me a little hope that everything might turn out okay. I needed that.