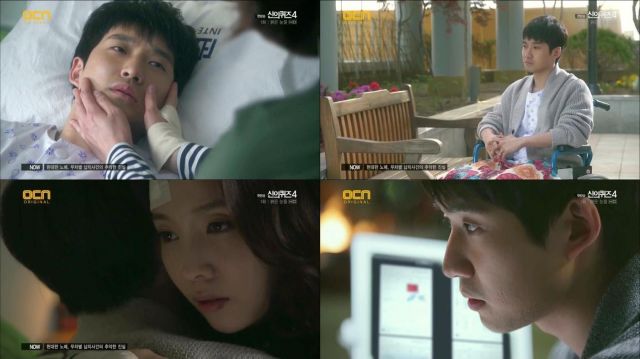 The opening is fairly boilerplate action detective stuff. There's a tense chase that unravels because in TV land criminals have a pretty unreasonable ability to shrug off bullet wounds. So everybody gets a little beat up and worn out. There's no serious drama going on here- "God's Quiz Season 4" is just clearly setting up the kind of program it wants to be- an episodic crime thriller with characters we all know and love.

Well, most of us know and love anyway. I have not seen the first three seasons of "God's Quiz", and I very much get the impression here that I was supposed to know, among other things, who all these people are. Jin-woo (played by Ryu Deok-hwan) has apparently been in a coma since I presume the last season's cliffhanger. And so much of the drama is wrapped up in the guy's recovery that it's difficult to focus on the actual casework.

Even the main gimmick of the drama (the medical investigation) is for the most part absent here, because it's extremely important that we know where all the characters stand with one another, to the point that the mystery is practically an afterthought. On one end I can't really fault the drama for delivering on loose plot ends that fans of the series are likely seriously interested in. But as someone who's only seeing any of these people for the first time, it's difficult to get particularly excited about anything. There's not very much about "God's Quiz Season 4" so far that feels all that unique.

The small moments of humor we get are clearly intended to be appreciated in a broader context. I thought Jin-woo's reaction upon waking up was rather crude. And weirdly I could see it coming from a mile away even thought I didn't know who these people were. Whatever this drama's trying to do, it's pretty clear that an amnesia plotline is not on the priority list.

I'm not particularly impressed with anything "God's Quiz Season 4" has shown us so far. The promos made this look like a drama about doctors and silly humor and so far there's not much of either of that. The only solace I can take is the possibility that this episode is just intended as set-up to the broader plotline- that these basic questions of what the characters have been doing had to be resolved before we could get into the more interesting substance of things. Surely there has to be a hook around here somewhere.