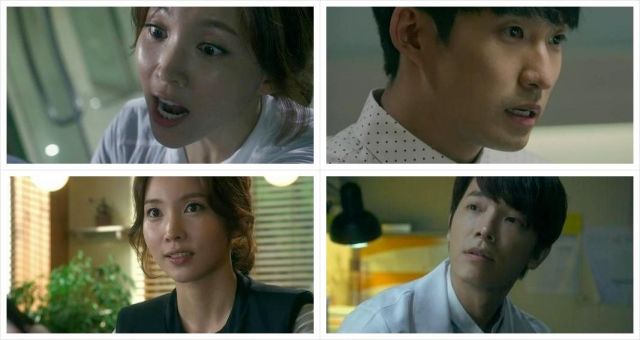 The drama converges into the final plot point here, as the opening helpfully illustrates the various parts of the story to date that are relevant to the incoming final proceedings. Jin-woo is, appropriately enough, immediately tossed into disarray by some bizarre revelations about the kid he's been intermittently caring for over the course of the season. We gets lots of answers- but obviously not enough to render the final episode a moot point.

There's oddly little emphasis on Si-woo, even though his disappearance was the main shocker of the last cliffhanger. For the most part everyone is so focused on bringing all the various pieces of the mystery together that Si-woo is a secondary consideration. He's still important enough, it's just that all events have to take place in the proper order such that the final meeting and cliffhanger of the season are dealt with in an appropriate enough way.

Focusing on the mystery and not Si-woo is actually pretty appropriate storytelling, given how little we've really found out about the guy up until this point. At the same time, this makes the emphasis off the cliffhanger come off slightly awkwardly. I get that the hostage deal thing is something heroes always do for their friends, even if it's technically against police policy, but so far as I can tell Si-woo was never that close with anyone else here to begin with.

The villains, at least, manage to be intimidating. Part of the reason why this works here (as opposed to "Grandpas Over Flowers Investigation Team")  is that we really don't know that much about what's motivating them. The clues just inch us closer to understanding what's happening. Jin-woo's deductions are decent enough, yet there's something inherently scary about a villains that's so difficult to piece together. They clearly know what they're doing- even a more typical false flag gambit comes off pretty convincingly here.

The sheer scale or organization here is enough to make one bristle. It's a far cry from the previous episodes where it often felt like the entire criminal enterprise was just that one guy acting all threatening. It makes for an appropriate climax, except that the ending and preview makes it difficult to tell where the heroes are going from here. Especially considering the behind the scenes stuff that the drama keeps showing us right at the end. It's pretty out of tone with the cliffhanger. Although that may be the point.