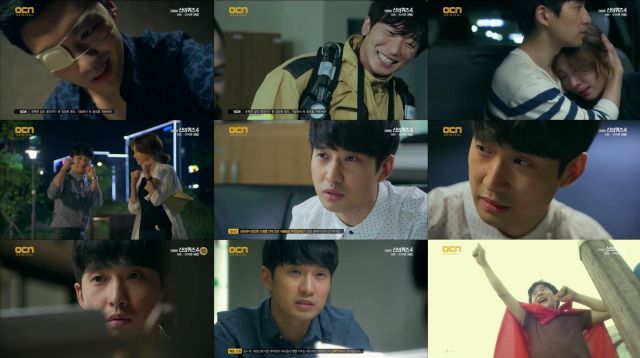 The mystery this time involves an overabundance of clues. At one point Jin-woo even stares up at the giant clue board perplexed as to how all of these various elements could possibly fit together into a single coherent plot. In all honesty I'm not sure I fully understand all the complexities that were going on there, even if a decent attempt is made at an explanation. What this episode is really going for, though, is the catharsis of backstory.

It's a little annoying how this drama does a much better job encouraging emotional attachment to the weekly guest appearances than any of the core cast, but I suppose I'll take what I can get. For a crime procedural there's a surprising amount of empathy with the perpetrators. Oftentimes they come off more sympathetically than the actual victims, who exist mostly just to get murdered and be reorganized as a clue in the greater puzzle.

The general tendency of the drama toward wince-inducing violence is also firmly in place. It's nice to see an actual character this time give a clear reaction of "no why are you doing that I'll do that thing you want just stop weirding me out". Sometimes I wonder if that's the real skill which unites the team in terms. It's not that they're skilled so much as they have a nigh-infinite toleration for imagery that in most people inspires squeamishness.

That's the best way I can think of to suss out the opening anyway. Jin-woo and Kyeong-hee really don't seem all that bothered by the fact that they're suddenly at a crime scene, and the victim is someone they actually knew personally by name. "God's Quiz Season 4" is just so frequently determined to get back into episodic territory that, well, there just isn't that much room for much character development or reaction. The occasional comedic bits at the lab tend to be the closest we ever get to an elucidation of who these people are and why they're any different from any other forensic investigators.

Well, that and the conspiracy, which this time manages to be incomprehensible twice in a row. I have no idea how this scam with the daughter is supposed to work, but I'm already refusing to believe that it was the easiest way of manipulating Jin-woo into doing whatever it is that the bad guys want him to do. And the whole bit at the end with the gun was just...I really wish "God's Quiz Season 4" would make up its mind. Being an episodic crime drama is good enough on its own without mixing in these really weird outrageous conspiracy elements.