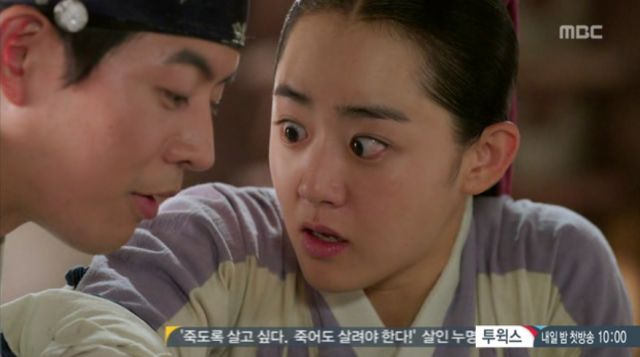 This episode was all about Jung and Gwanghae's growing relationship. Other events were incidental like the Ming envoy accepting expensive Joseon relics as bribes and getting caught or Kang-chun forbidding to trade with Hwa-ryeong's trading company unless she quits. These characters and "subplots" seem to only exist to support Jung and Gwanghae's romance. I quote "subplots" because they're not even independent plot threads. They're half-mutated alien creatures that minimally resemble a subplot.

Early on in the episode when speaking with Prince Shin-sung, Gwanghae accidentally discovers Tae-do's real name and recognizes it. (He had been calling Tae-do "Bodyguard" until that point.) Gwanghae immediately realizes that the woman he met in Punwon Kiln is Jung acting under a new identity: Tae-pyung. He forbids Tae-do from telling Jung that he knows the truth and proceeds to tease and make trouble for her. It's kind of adorable watching him flirt like a six-year-old. He calls her name every minute and sends her on senseless errands in retribution for lying to him. He also just wants to be around her because he thought she'd died and he's reveling in her existence. 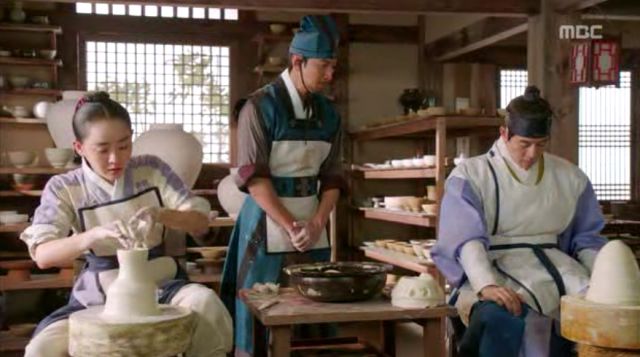 Gwanghae decides to learn ceramics and orders Yook-do and "Tae-pyung" to help him. He decides to gives her the time it takes him to make a covered bowl to tell him the truth. If she doesn't, he won't forgive her. They learn to spin the potter's wheel together and then Yook-do leaves "Tae-pyung" to teach Gwanghae. There were a few handsy moments while she taught him and then a full, awkward beat of awareness. That never happened in " Ghost ". Gwanghae needs to take some tips from Patrick Swayze. Anywho, by the end of the flirtatious bowl-making, Jung still hasn't told Gwanghae the truth of her identity, which infuriates him. He slams down the bowl she made for the king when she was a child and says her real name. She freezes and the episode ends.

It's the first episode cliffhanger that held any real tension. After the developing a deeper relationship throughout, there were actual emotional stakes on the line. It was also good that Jung disappointed him so that those stakes can be drawn out for a longer period of time. This is a thirty-two episode drama and so far it's suffering for good material. That, and now the viewer is more invested in their relationship because it's been developed past the puppy love stage. 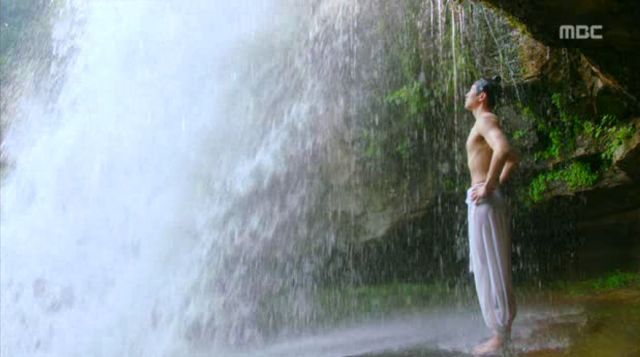 Speaking of love, brotherly love is an aspect that is continuously highlighted. Last episode we saw Tae-do's not-so-brotherly love for Jung and this episode we see that Gwanghae really thirsts for his hyung's affection. Only Imhae is selfish and holds a grudge against Gwanghae because their mother died during his birth. Perhaps this is the reason that Gwanghae cherishes his younger brother Shin-sung so much. He hates what the competition for the crown does to them.

On a sidenote, all of the adults overact: the king, the Ming envoy, Royal Consort Inbin. It's utterly ridiculous and the director needs to tone it down.

The biggest character point was that Jung decided to be a ceramicist for herself. Her near death experience at the hand of the Ming envoy showed her what she really wanted, and that was to create ceramics. She no longer is solely motivated by her promise to her late father. That's a big step for her. She is now intrinsically motivated, and that's exactly what I like to see.