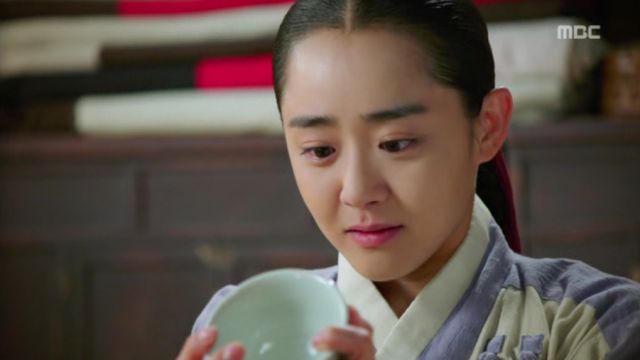 The tensions and secrets in "Goddess Of Fire Jeongi" seem to be dragged out rather than restrained. There is no excitement in waiting for each secret to be uncovered. The writer allows each issue to stretch on until its last gasp, and then he reveals the truth at the most anticlimactic point possible. Such is the case with Kang-chun discovering Jung's identity. It seemed as though he had figured it out last episode, but it took him another sixty-minutes of airtime to arrive at the fact that she is his arch nemesis' daughter. I really hope the story does not fake the viewers out in order to have Kang-chun remain in ignorance next episode as well. I know I wanted tensions to remain longer than a hot minute, but the contrived way in which this show handles them is terrible. 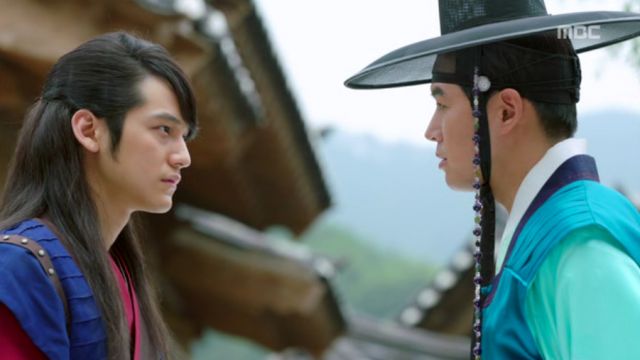 Gwanghae discovers that someone has been selling off Punwon Kiln goods and has altered the ledgers accordingly. He is told that Jung has a remarkable memory for ceramics and enlists her help in drawing the missing pieces. When the drawings are brought to Kang-chun's attention, he has the pieces destroyed. To be more accurate, Royal Consort Inbin has Tae-do destroy them. The whole situation is basically the writer's attempt to make Kang-chun discovers Jung's identity in a semi-complex sequence of events. How? Yook-do recognizes Jung's drawing style and Kang-chun has her things searched to see if she has any lists of stolen goods. She doesn't have lists, but she does have her father's teacup. It's a giveaway of her identity.

Let's take a moment to look at Yook-do, Kang-chun's son, who outed Jung. He at first admired Jung until she proved she could so something he couldn't. Then his pride got in the way and he turned against her. He seemed so earnest in his convictions, even willing to risk death for the love of his father. But when Jung presents a technique he told her didn't exist and that he could learn from (in the past he was thirsty to learn), he just allows his pride to get in the way. His pride was on the line many times before and he still remained by Jung's side. Part of the reason Yook-do's loyalty to Jung collapses is because he loves Hwa-ryung who is father hates - he cannot stand the blow Jung dealt to his pride. I would sympathize more with him except for the fact that his love for Hwa-ryung is completely uncompelling as a catalyst for his personality change. She fakes compassion and concern for him and he falls for her pretty face. 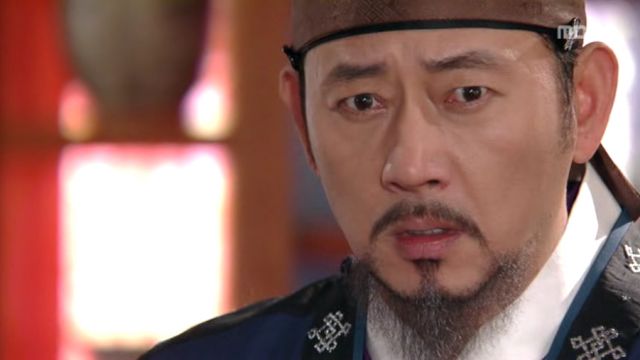 The only truly natural development in this show is the romance. Moon Geun-young and Lee Sang-yoon have good chemistry that develops along with their characters' feelings. He seems much more pulled by her than she by him. Her circumstances preoccupy her more than her romantic feelings. I find the imbalance in their emotions enjoyable. It makes me wonder when she will start to reciprocate equally.

Aside from the romance, everything else is flung in whenever the writers need a person or event or thing to create strife. Even poor Kim Beom is getting less screen time as he becomes a plot-pushing pawn. He only appears in this episode to provide romantic conflict for Gwanghae and then later on to become a political pawn. Of course, he has his reasons for becoming a pawn (probably something to do with Jung), but he is still a pawn. He is becoming more unthinking as time goes on - I don't like it. Imhae, although much less likeable, is used much in the same way, to goad Gwanghae. He has no real reason to be.

As always, I will as this show for more substance. It has nearly half the drama left to go. It's going to need it before it starts relying on schoolroom tactics to keep things moving.