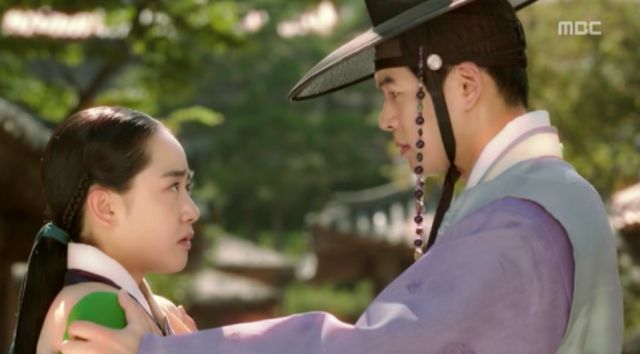 As "Goddess Of Fire Jeongi" nears the middle of its run, it has yet to settle into a pace that will make it last for the long haul. It is still highly episodic and unclear about where it wants to lead its audience. The only aspect of the story that is sure is the romance. There are people who are attracted to each other and who have to struggle to overcome socio-political barriers in order to love. Other than that, Jung wants to become a ceramicist and the show gives us nothing about why that is important in the long run. Instead, it is haphazardly tying that to the political struggle in the palace between the three princes by using Punwon Kiln and ceramics as the battlegrounds and ammunition. 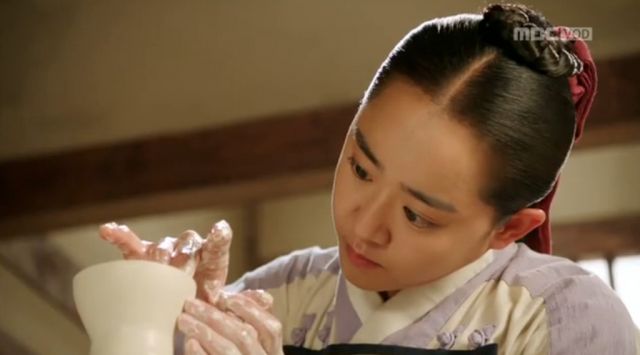 While using ceramics is a good political tool (art is a prized commodity and a sure sign of wealth), the format of the story cheapens the true role of ceramics and art in history by making art the endall in every episode's overly simplistic plot. By this point in the drama, there is little chance that the formatting of the show will change unless the writer changes. The only thing left to critique is the execution of the overused writing devices such as the overly kind-hearted and true heroine and the villains who can seem to only find one person to scapegoat.

Episode 15's problem of the day focused on Jung overcoming the animosity of Kang-chun and his son Yook-do. I thought that Kang-chun had already figured out Jung's identity as Eul-dam's daughter, but he is, as of now, only suspicious. That does not change the fact that Kang-chun hates Jung the trouble-making woman, hates her association with Prince Gwanghae, and hates that she humiliated his son. He plans a competition between her old teacher and Yook-do where the loser will be ousted from Punwon Kiln. Of course, he rigs the game and has Jung's work destroyed.

The silly ceramics competitions that happen aren't bad occurrences in a show about a ceramicist. What is silly is how the nefarious political underpinnings of the competitions are not noticed by the king or by anyone else in power. The only political figures who take part in this drama are the king, Royal Consort Inbin and any minister or minion who supports the Inbin. It's hard to fathom that the king does not realize that Inbin is trying to manipulate things. She would be one of the most obvious political players as the only living mother of a prince. 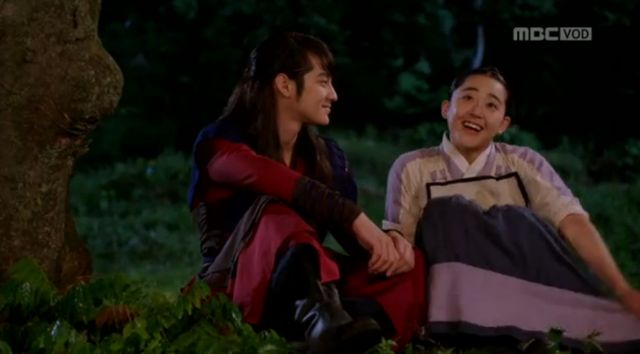 Despite my complaints about the politics, I'm rather enjoying the slow moving romance. I dislike Jung's overly simplistic view on life, but I love how that view makes her vulnerable to her feelings for Gwanghae. She is so focused on her goal that the love sneaks up on her. She is always adorably surprised when the small interactions between them affect her so deeply.

Her deep affections for Gwanghae are so obvious that it irks me to see Tae-do try so hard to win her. I know he's been loyal to her since they were children, but this kind of devotion borders on the ridiculous. He is a smart, capable, handsome man. In actuality, very few people carry a torch for one person for that long. It's a waste of Tae-do's character to have him romantically involved. I can understand his desire to protect her, but more than that is unrealistic and annoying. I prefer that he try to honor his promise to Eul-dam to protect her rather than use the promise as an excuse to love her and marry her. It's a cheap way to create a second male lead that too many dramas use. There really is no need for a love triangle. History gives Jung and Gwanghae enough plot fodder to be used.

Jung is a woman who becomes important in Joseon history as an artist with political power. I wish they'd start to focus on that more rather than making up insignificant "problem-of-the-day" plotlines. Show Jung as a woman worthy of her place in history. Show Gwanghae as the royal pawn who has to ascend to the throne and live in political turmoil. Show us a romance that cannot be because the stakes are just too high to give up the welfare of the country for love.