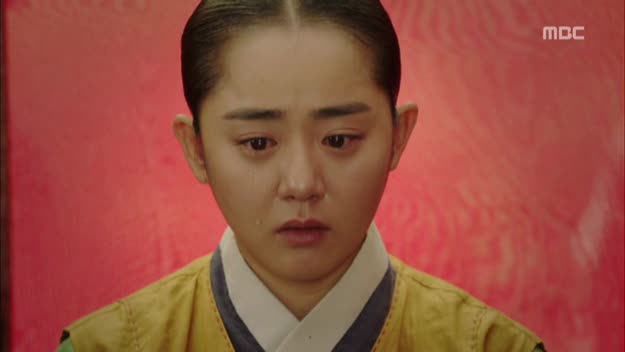 I'll admit it: the show tried to do what I asked in episode 29. It tried to incorporate the Japanese invasion with the character development. It tried. It gave us some emotional payback when reveals were made and there were consequences that felt weighty and real. This is what I wanted for "Goddess Of Fire Jeongi" in the early teens. 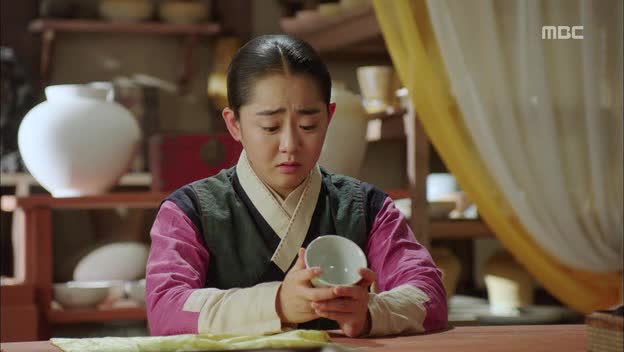 A few reviews ago I mentioned that this show didn't emphasize the importance of porcelain in the Asian economy. In episode 30 it gave a tiny effort. A Japanese warrior is offered a reward of land and a title, but asks instead for General Toyotomi Hideyoshi's most prized ceramic tea bowl. That's a mighty trade for a little tea bowl. It was an effective display of the power of ceramics. Of course, Royal Consort Inbin had been using the Punwon Kiln's porcelain storerooms to fund her political plans all drama long, but the effects of her mechanizations weren't as powerful.

Many characters reached their breaking points this episode and while it was good development for them, I wanted most of those breaking points to come a lot sooner. Kang-chun, Tae-do and Gwanghae learn that Kang-chun is Jung's biological father, shocking all of them. The strongest collapse was Tae-do's. He has been dedicated to Jung and her welfare his entire life. To hear that her mortal enemy is her father is almost too much for him to bear. It is also one of the only times that Kim Beom is allowed to show his amazing skill in acting. Tae-do came to life and made me wonder why such an interesting character had been relegated to the sidelines for the bulk of the drama. Only now do he and Gwanghae really pair up to protect Jung and stop the Japanese. This is the kind of work Tae-do should have been doing because it gives him a real purpose and he's able to do what he wants: protect Jung. 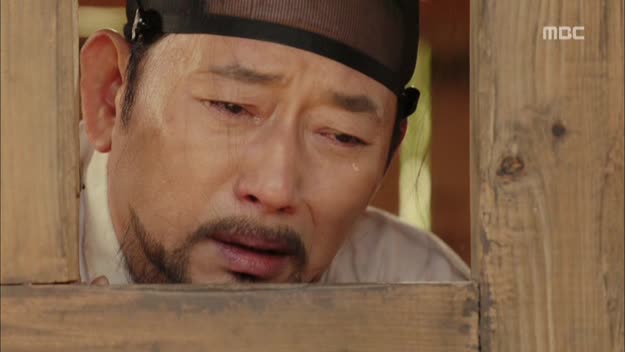 Then there is Kang-chun who has tricked Jung into going to the Japanese by apologizing to apologize to her father, Eul-dam. This is before he knows she is his daughter. Once he does discover that she is, he breaks down into tears and desperately sends Gwanghae after her. But it is too late: the Japanese have captured her and are transporting her to Japan. This is one of the most interesting storylines in the drama because there may never be a resolution. Jung may be taken to Japan and never be heard from again, which Kang-chun and she will have to live with. That is strong, bitter stuff. After all the things they have both done to each other, they may not get the chance to reconcile.

I hope that the tragedy stays poignant and isn't undercut by meaningly bow-tied endings to smaller plotlines. There was one in this episode. Yook-do says that he understands Jung, but he can't forgive her. It is inconsistent with the direction his character has been going and the entire scene was awkward and out of place. Revenge and betrayal are messy businesses that aren't often resolved easily. It makes for good drama and I hope Goddess of Jeongi grabs a hold of that fact during its last week. 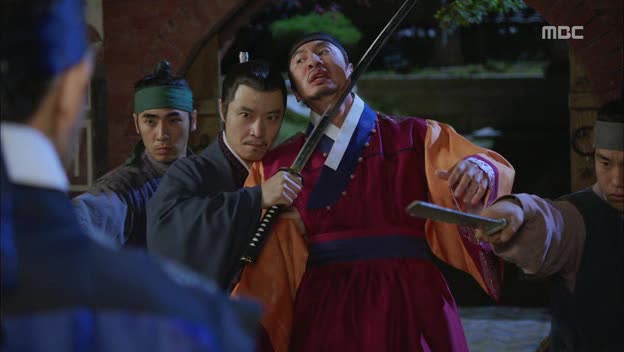 Imhae, however, and his idiocy finally served a real purpose. He wanted to best Gwanghae and chased after the Japanese ceramicist kidnapper only to be captured himself. Later, the Japanese kidnapper uses Imhae to negotiate his escape from Gwanghae and his men. Imhae's eagerness to win the favor of the king ruined Gwanghae's attempt to apprehend the kidnapper. It was the first time Imhae's lack of intelligence and urgent need for power and recognition was used well in the story. It thwarted Gwanghae in a most frustrating way and it aided the Japanese. This is very bad because Toyotomi Hideyoshi orders the takeover of Joseon. Gwanghae has been suspecting it would come soon and he was right. We now have two episodes to deal with it. Let's see what happens.