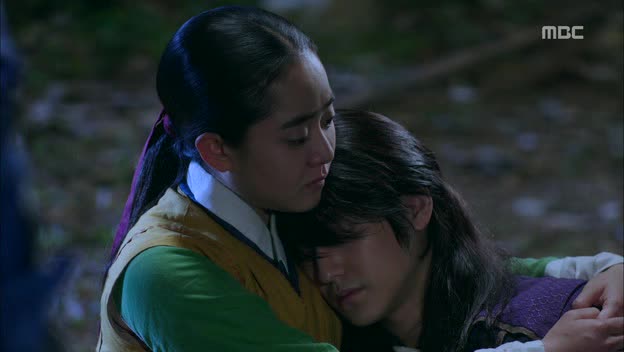 War is now upon 1592 Joseon and the country has descended into chaos. The incompetency of King Seonjo is well-known in history and one thing that "Goddess Of Fire Jeongi" has shown well is his unworthiness of the throne. As soon as Japan invades, Seonjo declares Gwanghae crown prince and flees the capital.

Before this happens, Tae-do goes to save Jung from the Japanese kidnappers and loses his life while protecting her. He always said that he would give his life for her and it was really only a matter of time before he had to. His death hurts Jung deeply and although Moon Geun-young cried a lot and her character declared that he was the most important person to her, "Goddess Of Fire Jeongi" never really did a great job establishing the closeness between the two. Yes, he loved her, but it was hard to see the feelings she had for him. They were close on paper, but not on screen.

Because of Tae-do's death, Jung hardens herself to Kang-chun again and refuses to forgive him. This storyline lost its poignancy when the writers waited thirty episodes to deal with Jung's family tree. It would've been better had the show given Jung, Kang-chun and Yook-do time to deal with it. Instead, a wonderful plot point is getting lost in the madness of war. Or, it's a writing cop-out.

Hwa-ryung finally got her comeuppance. She admits to Yook-do that she loved Tae-do and loses him. Then she makes a deal with Royal Consort In-bin who is then evacuated with the king, leaving Hwa-ryung with nothing. Her greed got the best of her. Again, watching her bad decisions and jealousy turn out for the worst should've been more satisfying than it was.

The character I mourn most is Gwanghae. He had so much potential because he is historically interesting and "Goddess Of Fire Jeongi" billed him as a romantic lead. History goodness plus romance should've equaled some great drama. He could've been a strong character who bolstered Jung on journey to being a ceramicist She could've done the same for him. More than romance, it was the idealized version of Jung that kept Gwanghae going. While that is great motivation in his mind, I can't read his mind so I was bored by the romance.

What will decide Jung's fate, however, is the fact that Kang-chun has gone to the Japanese and promised to take over Punwon Kiln and run it for them. Jung was part of that deal in that she has to be there so the Japanese kidnapper can take her to Toyotomi Hideyoshi. He is a consistent character, one who values self-preservation above all else save for Yook-do. Kang-chun takes over Punwon and Jung glares at him, wondering if he will ever change. He probably won't. Not in one episode. Perhaps he'll die.

In any case, this story is almost over. One more episode to go.