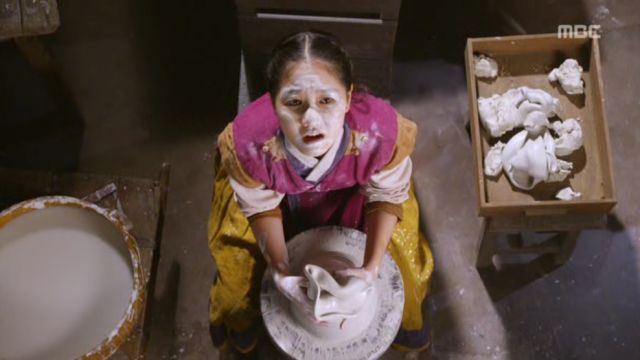 This episode also centered around a jar; two, in fact. But there was a lot more motion to the storyline, the politics and the character development, which made it much more enjoyable to watch. Our heroine is finally pushed towards her calling and the hero starts to truly feel the weight of his royal status.

King Taejo's jar has been broken, fixed and presented to the king as of the jar-centric events last episode. But villain Kang-chun's righteous son, Yook-do (Oh Seung-yoon), admits that the jar was broken - a treasonous action. What follows is the bad guys' attempt to get rid of Gwanghae via treason jar and the king's attempts to save him by placing the blame on Eul-dam. It is the beginning of Jung's transformation into the artist that made history. Jung won't sit by and let her father take the blame for her actions. She confesses to fixing the jar, but the king doesn't believe that a child could do it. To prove her talent, the king orders her to make a piece. 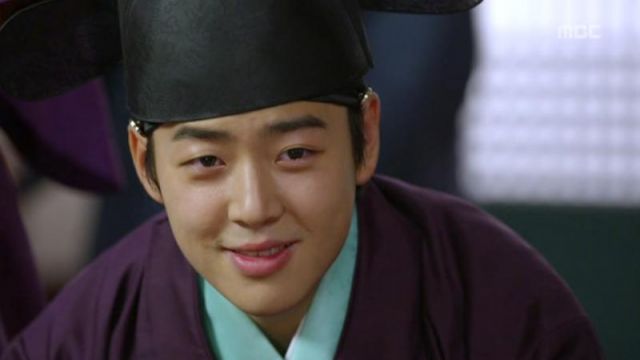 We follow Jung's struggle as she tries to create and fails. It's good to see the character work on her art and grow as she does. It also showcases Jin Ji-hee's acting better because it requires her to run the gamut of emotions. Then, through her own efforts, tears and some support from Tae-do and her father, Jin Ji-hee's character makes a tea bowl that represents her parents' love. Her filial piety wins the king's heart.

It's a wonderful message, but it's not realistic. Also, the execution of the entire scenario was over-the-top. The king yells too much; Imhae gets so angry that he looks like a gaping fish; the court flounders like a bunch of fools; Jung is overly weepy and at the same time shockingly bold. It was a big ball of cheese that felt insincere and overwrought. The only moments that I truly loved in it were when the camera focused on No Young-hak's face. He, as Prince Gwanghae, really carried the episode with his spot-on portrayal of a struggling prince.

Overall, this episode was an improvement in terms of story and character development. But, it did feel like it was gearing up towards something: the change from the young cast to the adult cast. While I'm excited for the cast change, I also wish these first four episodes felt more substantial. The backstory was not interesting enough to spend four episodes on. It could've been condensed into two and we would've gleaned just as much from it.