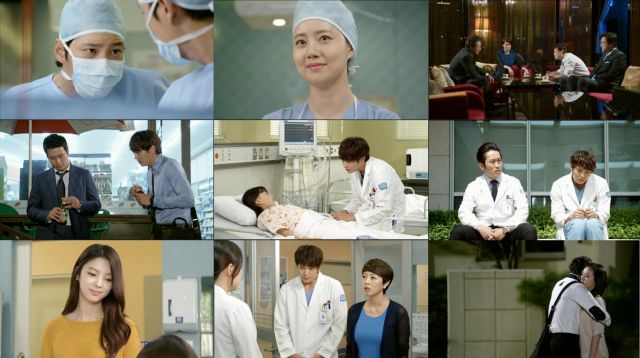 The medical crisis that came up at the end of the last ciffhanger is resolved a little more quickly than I would have liked. "Good Doctor" has good material when it's working with actual conflicts of doctors being put into difficult situations and being forced to perform with whatever abilities or limited skills, so this plot development, while interesting, resolves itself a bit quickly. I'd like to see more along these lines.

A larger focus is taken this episode as to the question of Shi-on and the interactions his filial relationship. We find out what happened to his mother and, I have to admit, I can see why that experience would turn Shi-on off on the whole concept of parents altogether. It almost feels like a cheat, considering the way she's been built up as sympathetic, but then I realized something. As far as Yoon-seo knows, Shi-on's mother really is unamibiguously totally sympathetic. So yeah, while we in the audience have been taken for a ride, so has Yoon-seo.

Aside from these two major events, this episode has a lot of build-up, but very little actually happens. There are lots of smaller stories going on in this drama, but they're often harmed by the inconsistent focus. It can be difficult to keep track sometimes of all the various characters and allegiances because very few of them have characters that are well-defined enough for these little stories to necessarily mean that much. There's little metaphorical or thematic relationship to the main plot of Shi-on adjusting to people, so it's difficult to stay engaged.

Let's take the story of the patient, her older sister, and the supporting doctor. Of all the subplots this one is the most clearly defined, and there's a definite event this episode that moves the action forward. The thing is, it has basically nothing to do with Shi-on's plot at all- it's not even a remote parallel. The story's still reasonably well-done and capable of sustaining my interest- there's just not really much of a point to it.

By contrast, let's take the angry jerk doctor. He gets a brief cute, amusing scene this time around where he tries and fails to extract a drink from the vending machine. This story doesn't even have a plot- but it does connect well as a parallel to Shi-on's story because this guy isn't really very good with people either. He's just so aggressive that it's not generally seen as relevant. Of course, both of these stories have another major problem- I can't remember any of these characters' names. Such is the problem of devoting such a large chunk of runtime to third-string characters.