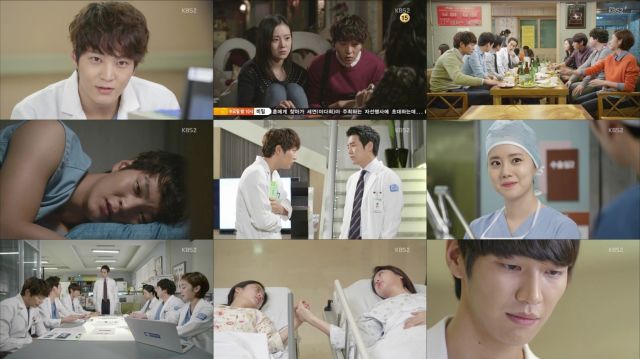 The central romantic subplot in "Good Doctor" for the most part reaches its conclusion this episode as Shi-on and Yoon-seo become a couple. It's all very cute stuff- I really appreciate the music in this drama which does a lot for setting and highlighting the mood. It accentuates the extended culmination of this relationship in a way that really works well with the build-up we've been seeing throughout the drama's entire run.

I like that the drama chooses to have all of this happen right now, rather than at the very end of the last episode, because it's genuinely interesting stuff mulling over exactly what kind of a couple Shi-on and Yoon-seo are supposed to be- what they would do when they're together, how they would express affection#. Shi-on's autism is a clear element in all of this, perhaps best exemplified in the scene where the other doctors find out about the relationship. There's a stilted, uncertain awkwardness in this moment that's extremely believable, even if the other doctors have for the most part accepted who Shi-on is.

Once the episode moves away from this material, though, it's back to "Good Doctor"'s more questionable narrative directions. I'm still not at all sure what's going on with this Peter Pan subplot and why it's even in the drama at all. Is it filler? An excuse to use the Peter Pan outfits that the costume department had just lying around? It's not a terrible scene, honestly, it just feels kind of pointless. And eye-rollingly goofy, even by the standards of the drama.

All the drama's other conflicts move at the same slow pace they always have. While I'm not exactly ecstatic about any of them, for the most part they're good, worthwhile subplots. Because I'm used to their general slow progress, I doubt I'll mind that much when the final episode of "Good Doctor" inevitably concludes them at the same deliberately subdued pace.

The strange part about this drama which this episode makes all too clear is that while it has extremely strong characterization, the plotting tends to range from either awful to passable. And because the plotting is passable now, it's much easier to focus on the strong points. It's very easy for me to smile and feel empathy for the extended first part of the episode, which is just Shi-on and Yoon-seo doing basically nothing except normal random spontaneous couple stuff. It's cute, and it doesn't have to mean anything- so it's a nice happy little pick-me-up, a bit of escapism I can honestly get behind. And even if the rest if the episode doesn't do this quite as well, just doing whatever works is all right by me.