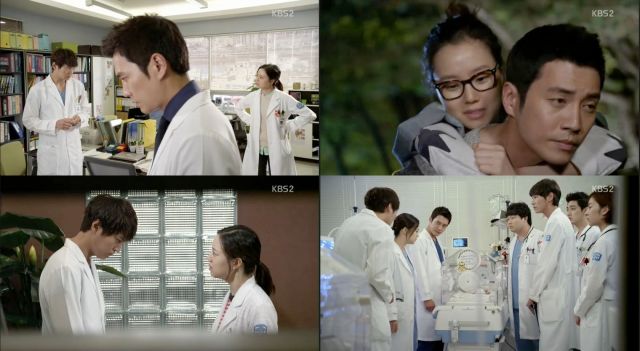 The drama isn't exactly exciting me at this point. All the appropriate pieces are here to make something, I'm just not at all sure what. This episode's ongoing crisis of the baby on life support feels curiously mundane, as if it's just a general breather from the political conflicts which, likewise, feel more like genre staples than they do something that's thematically relevant. So our characters have gotten mixed up in selfless, selfish alliances. That's interesting, I guess, but not terribly memorable.

What continues to be more interesting are Shi-on's motivations and life lessons. He is, at least partially, wrapped up in the visage of the naive newbie who doesn't understand the bureaucracy behind medicine. But the autism aspect of his character sums up this conflict in a fairly interesting way. It's easy to forget that, technically speaking, doctors are duty bound to help patients. There's something quite charming hearing this literal, logical explanation straight from the lips of Shi-on, with no apparent appeal to emotion at all.

Speaking of lack of emotion, Do-han and Chaek-young prove to be a surprisingly compelling power couple this episode. There's a basic stiffness to their interpersonal dynamic that's oddly appropriate, and nearly seems embedded in their genetics. It's fun to think about how, given what little patience they seemed to have for just about everything around them, they're still a couple living together and planning to get married.

The acting in this drama is quite good all around, even though Joo Woon is the obvious high point. It's just difficult to really get involved in the storyline because there aren't any stakes yet that really feel like a genuine threat to anyone. It's too early in the drama for anyone to get serious damage done to their careers- and really, everybody barely even knows each other yet, so it feels like we should be spending more time on character building that literal drama.

Shi-on is still an interesting character, and watching his reactions and other peoples' reactions to him still prove fairly interesting. The main issue is that all the other political considerations seems to be coming on too strong, too soon, especially when being coupled with a storyline about imminent mortality. I'd just like for this drama to slow down for a moment, take a deep breath, and not hurry so much with its pacing. I wasn't thrilled about the concept at first, but now that Joo Won has sold me on Shi-on's character I really don't need that much plot going on at once.