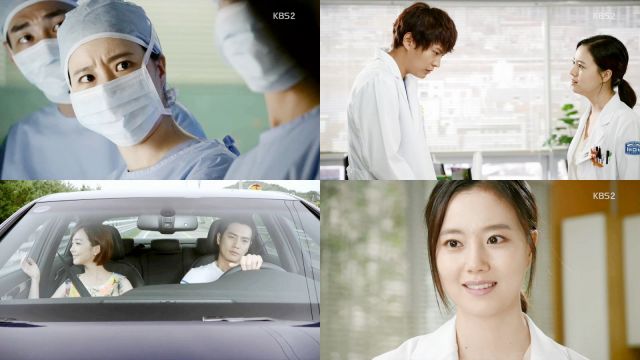 The drama does a better job engaging the audience this episode, though in a bit of a roundabout way. The previous political and mortal crises are largely done away with as two new conflicts emerge. "Good Doctor" is still trying too hard to arouse interest in the audience through extreme situations, but at least this time there's a thematic relevance that's actually appropriate to the basic storyline of Shi-on adjusting to be a doctor.

One crisis, for example, is the first one to genuinely raise the question of whether Shi-on belongs in the hospital. So far the indistinct mob calling for his dismissal has been overreacting- it's a pity they hadn't been more subdued before, because this is a far more appropriate time for righteous outrage. There's an actual conflict at play here, since even though we know the situation is more unfair to Shi-on than it may initially appear, there's no way for any of the characters to know that. Even if they asked Shi-on he wouldn't be able to explain it.

The other crisis is something that I'm sure happens at hospitals all the time. And the reason why it works is precisely because it's such a normal event. Everything in the drama so far has been so unique and unusual that there's been no clear character baseline. We can't really judge how these people react to unusual situations when we don't know how they endure the more normal drudgery of the doctor's life.

More hints of that come up as we see more of Do-han and Chaek-young's relationship. The way they aggressively avoid conflict with each other is quite interesting compared to their more steely resolve with other characters. Issues come up this episode which should, at the very least, make one of them upset, but this emotion is deliberately sidestepped and they just act like nothing is wrong. It's hard to tell whether or not this is a healthy relationship dynamic. They could be desperately trying to hold the romance together, but it's also possible they don't really like their public personalities and just don't want to act like that when they're with each other.

All in all this is slight improvement in the right direction. "Good Doctor" is more interesting and engaging than what we've seen before, but it's still relying on the same basic elements of drama in order to hold viewer attention. This drama can't keep piling up the tension of life-and-death situations or it's just going to become a self-parodying joke. There's enough interesting stuff here that I don't want to see it come to that.