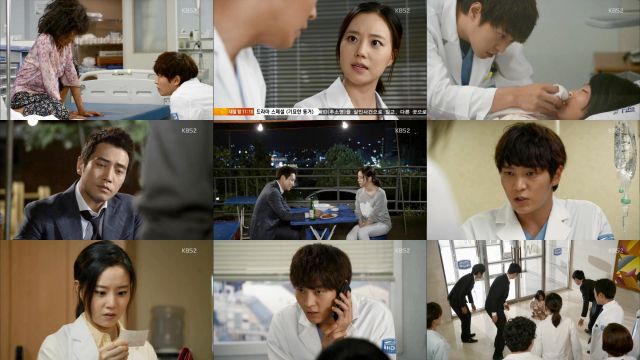 There's plenty of cuteness this episode as Shi-on tries to negotiate with an adorable wolf boy about accepting medical care. Joo Won is still doing a superb job at his portrayal- it's noteworthy how, even though he's the only person the wolf boy has actually physically hurt, Shi-on still isn't scared. He just doesn't process the emotion the same way that the other docotrs do. That, coupled with his willingness to look completely ridiculous in front of other professionals, adds a very useful dimension to his character.

Unfortunately this storyline takes a very contrived turn by the time we get to the cliffhanger, one that's both annoying and feels rather pointless. Do we really need people actively trying to sabotage Shi-on? Especially by putting other people in the hospital in physical danger? There's plenty of obstacles that can make people question Shi-on without having to resort to deliberate villainy.

Still, even if that emotion is agitation, I'm glad to see "Good Doctor" making a better effort to pull some sort of emotional reaction out of the audience. This drama has a bit of a meandering quality that makes it difficult to focus on a lot of the time. At its best, it feels like a slice-of-life drama about doctors, but the concept alone seems to be pushing for some sort of serious plot, although the drama can't quite seem to make up its mind about what this serious plot should be.

I can write now, with a fair amount of confidence, that Do-han and Chae-kyoung's relationship is in definite trouble. A situation has finally come up where a simple apology really isn't good enough, and someone's excuse for not coming home isn't one that makes a whole lot of sense. These two are supposed to be lovers preparing to get married- when one has a personal problem, it affects both of them, and there needs to be more emotional interplay than just apologies and accepted apologies.

This is a fairly minor conflict in the overall story, but the reason I keep focusing on it is because these relationship problems are serious and real, and the conflict lingers on in memory than whatever scheme the high council of suspicious doctors is cooking up. This drama needs to start moving away from contrivances. I know that the entire premise is, on some level, a contrivance, but again, it's a good enough one that we really don't need all that other stuff. The wolf boy is way more interesting as a reflection of Shi-on's atypical attitude than as a plot device intended to get Shi-on into trouble.