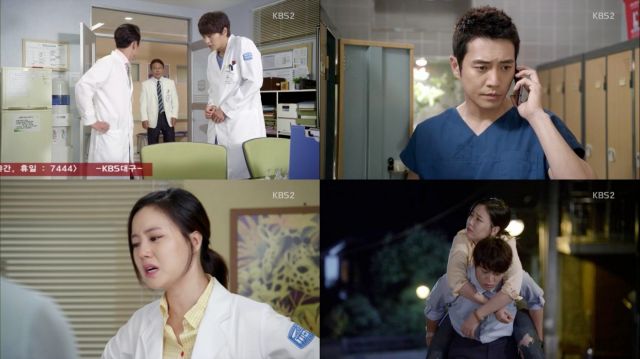 There's lots of genuine, good emotional performances this episode as Shi-on is forced into leaving the hospital. His position as a doctor and as a person is put under scrutiny as characters attempt to make the argument that the hospital is better off with him, in spite of Shi-on's apparent screw-ups. Particular point seems to be made of the fact that it's only the administrators who particularly seem to want him to go.

Unfortunately, none of this can reverse the horribly contrived nature of this entire plot in the first place. If we're going to accept, as most of the characters in this episode do, that Shi-on left the door open allowing the feral child to escape and injuring several patients in the process, it makes little sense to give him such benefit of the doubt. The event proves that he's a dangerous person and that an autistic doctor can't be trusted as he may forget to close dangerous doors.

Which doesn't actually make a whole lot of sense. Autistic people are pretty good about always making sure to do stuff like close doors, since they're obsesive like that. And even if they weren't, leaving the door open isn't that serious an offense except in an extreme situation like this. And given that this was such an extreme situation, the feral child probably should have been restrained somehow anyway, just in case his condition went sour and in his feral state someone would have to sedate him.

Most of the feral child stuff was last episode- and I admit, he doesn't even show up that much in this one. But that's exactly what messes this one up. I can't just pretend like this entire horribly contrived plot set-up didn't happen, since it's the entire basis of the current narrative thrust. However effective the performances and reactions, I know that this plot was started off in an idiotic way, and it's going to have to finish in an idiotic way, because the feral child is little more than a plot device designed to get Shi-on into trouble.

In many ways the episode is a frustrating one, because the elements clearly exist to make a compelling drama out of this, what with the conflict and performances, but "Good Doctor" is making a conscious decision to use contrived plotting and I really wish it would stop. There are so many possible ways for Shi-On to actually to screw up, in a way directly related to his autism, that this entire feral child conspiracy is both gratuitous and unnecessary. I've written it before, I'll write it again- this drama needs a baseline. It needs to stop with outlandish situations that are only in the story to advance a weirdly specific character direction.