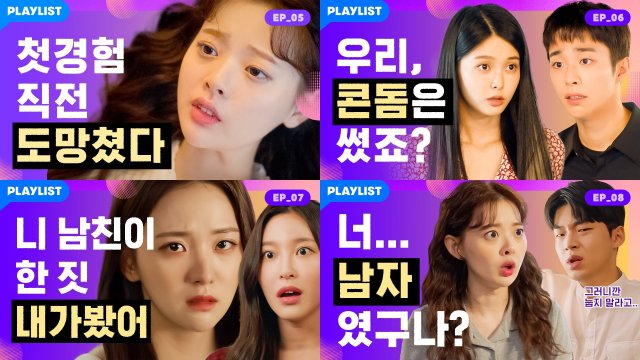 As episode five opens up, "Growing Season" signals pretty clearly that we're about to get to the part of the story where our heroines learn that men can't be trusted. But obviously foreshadowed as this was, there were more twists than I was expecting. Most obviously there are degrees of bad men, and I liked how the guy who starts out being the obvious villain here is soon shown to not necessarily be monstrous, just kind of clueless, albeit in an obviously self-interested way.

More importantly he just goes away really fast, which is as it should be. I like how the characters of "Growing Season" naturally gravitate away from unnecessary relationship drama, even though the premise kind of demands it. We get an explanation about the big fight which supposedly explains why Ha-yeong didn't want to be in the same project group as Ji-yoo. As it turns out slut-shaming wasn't actually the real source of the conflict, just the main expression of it.

This is a nice pedagogical touch to "Growing Season" away from more popular trends of social stigma. In reality most relatiionship conflict is personal, and trying to make it fit into broader categories just obscures what's actually going on. Take Ha-yeong's storyline of going to the gynecologist. The implications of what the gynecologist finds are obvious, as are the parallels between Ha-yeong and the angry mother who yells at the doctor. They're both in denial. The angry mother is just louder about it.

Elsewhere Ah-in is as perky and cheerful as possible. She really is an adorable character, and I like how her willingness to vivaciously discuss any subject, however awkward and private, really disarms the shame in those conversations. The bashful way she adamantly denies the boy she is obviously dating is her boyfriend is quite cute. Ji-yoo and Ha-yeong are great girlfriends chiefly because they're great at recognizing the distinction between friendly teasing and viciously spreading rumors.

In general Ha-yeong's character arc of learning to stand up for other people comes up great. It also ties in well to how Ha-yeong is largely incapable of standing up for herself. I was terribly frustrated about her by the end of episode eight, although looking at these episodes in full focus Ha-yeong clearly just learned the wrong lesson. Ha-yeong realized she was enabling bullying against Ji-yoo by staying silent and not communicating. So naturally, Ha-yeong decided that the issue was just that she was wrong, not that she wasn't communicating.

The main flaw "Growing Season" has is that Ji-yoo, as a character, seems disproportionately out of focus. Of the three big ongoing plots here two of them are about Ha-yeong, with Ji-yoo just playing an important role in one of them. I guess her particular romantic subplot does at least have some decent comic relief, though. We're also clearly moving to a payoff with her love interest in a storyline I'm expecting to replace the now concluded one about why mean girls are bullying Ji-yoo about how she carries condoms around.