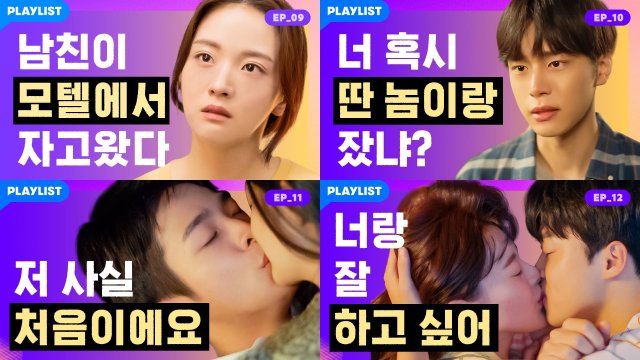 Up until now I have been reasonably outspoken in praising "Growing Season" for its practical usefulness in its frank discussion of sexual health and safety in the context of realistically drawn college aged relationships. It is with regret that I must withdraw this endorsement, as "Growing Season" concludes with a rather critical plot point left entirely unresolved. I am referring, of course, to the chlamydia infection sustained by Ha-yeong despite her being in a monogamous four year relationship.

"Growing Season" had so obviously foreshadowed the idea of Ha-yeong's boyfriend being unfaithful or even gaslighting her that it it took me quite some time to finally accept that wasn't where screenwriter Kim Hee-won-V was going with the storyline. The trouble is, I have no idea where she was going. It's perfectly fine to write a story about false assumptions of infidelity inadvertently destroying relationships. That's a real thing that happens, and it's brutal enough to make for compelling storytelling.

But this leaves Ha-yeong's chlamydia infection completely unexplained. Despite a visit in the final episode to the gynecology office no such explanation is even attempted. I was frustrated enough to look the subject up on my own and as far as I can tell there's no way for someone in Ha-yeong's position to develop such an infection. There are explanations that don't involve cheating. A relapse of a previous chlamydia outbreak is one, as is the explanation of symptoms lying dormant for so long that they came from a sexual encounter predating the relationship.

Neither of these explanations make sense with Ha-yeong, as chlamydia only lies dormant for a month, not years, and she seemed completely bewildered by the fact that she had a sexually transmitted disease at all earlier in the drama. Never mind the issue with science, though, this also wrecks the emotional resolution of Ha-yeong's character arc. It beggers disbelief that they can come to terms with their mistrust of one another while not expressing an interest in what exactly happened.

What's worse is that this storyline is the only one in the final few episodes with any degree of dramatic heft. Ji-yoo's romantic storyline is not...offensive in the way that Ha-yeong's is, but there's not much to recommend it either. I'm still kind of bothered that her love interest apparently lied about having a girlfriend. Ji-yoo continuing to pursue him despite his putting her off gives off unfortunate implications given that Ji-yoo is his landlord, and revelations about his emotional state don't make her actions seem any less predatory.

As for Ah-in, she just has a bubbly, cute, and utterly generic storyline right through to the end. This would have been tolerable if the other plots had been strong but as presented here the cutaways to Ah-in just call attention to how the "Growing Season" as a whole really ran out of energy in the final episodes. The twelfth episode in particular feels frustratingly perfunctory, with characters literally just telling us about how much they learned, with little real payoff.